Home News 14 YEARS TODAY SINCE THIS WENT DOWN! 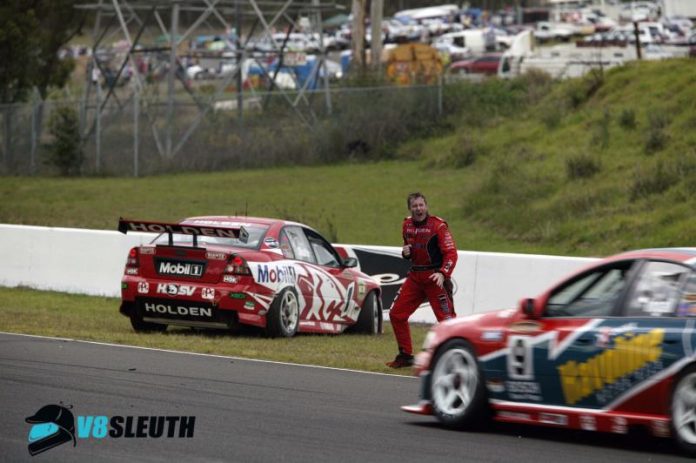 The bitter Holden versus Ford rivalry is nothing new!

NO matter what the Holden Racing Team’s chassis HRT 049 Commodore achieved in its racing life, it will never overtake the fact it will forever be remembered for being involved in one of the most controversial moments in the history of the V8 Supercars Championship.

14 years ago today, on November 30 2003, the ‘Shriek at the ‘Creek’ incident between Mark Skaife and Russell Ingall hit the headlines nationwide when the two bitter rivals collided on track at Eastern Creek as Skaife battled to claim second in the pointscore in the final round.

Locked in a tussle for position with rival Ingall – who had defected to Ford in the off-season as Marcos Ambrose’s Stone Brothers teammate – Skaife found himself driven off the road by ‘The Enforcer’ and out of a chance to take second place in the series from Greg Murphy.

Naturally, he didn’t like it and ran onto the road next time Ingall came past, prompting the Falcon driven to swerve towards a fired up and fist-shaking Skaife.

The former champion was livid, the incident gave V8 Supercars more column inches than anything in its history, and the passion that boiled within both men spilt over.

Skaife was penalised 75 championship points and given a $10,000 fine with a three-event suspension suspended until the end of 2004 for bringing the sport into disrepute, with an additional 30 point penalty for careless driving quashed.

Ingall was booted from the entire race weekend results, fined $10,000, deducted 70 points and also given a three-event suspension suspended until the end of 2004.

14 years on, it was ironic to see both Skaife and Ingall in broadcasting roles analysing the weekend’s Scott McLaughlin/Craig Lowndes incident in Newcastle!