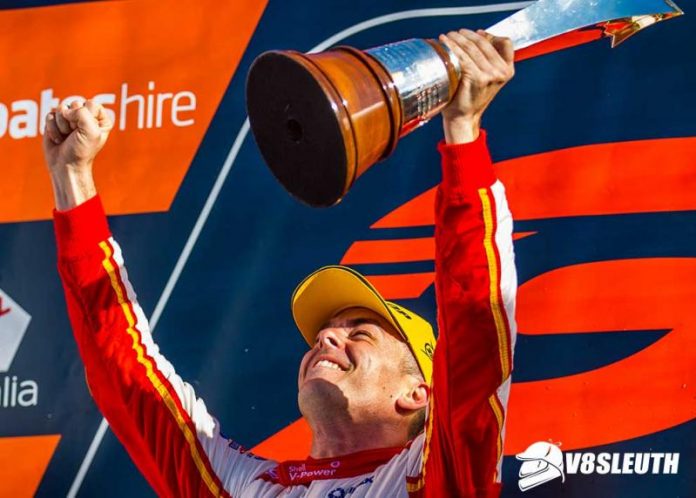 Although he ceded the Race 31 victory to David Reynolds in the closing laps, McLaughlin’s second place finish put him comfortably ahead of title rival Shane van Gisbergen, who could only manage fourth.

The championship victory comes 12 months after a crushing defeat in the closing laps of the dramatic final race of 2017.

This time there would be no late heartbreak.

When asked if it felt like redemption, McLaughlin said: “Yeah, we’ll call it that.

“Thank you to my mum and dad, my gran – I know you’re watching up there mate, I promised you I’d do this – Karly, my fiancee for sticking by me through the whole thing, all these guys, Shell V Power Racing, everyone here, all the guys, we worked so hard.

“I want to pay respects to Shane, we raced hard all year, it was a hell of a battle.”

The number 17 features more than a few times in the numbers behind McLaughlin’s triumph.

The championship was the 17th for the Ford Falcon in the model’s final race before it is replaced by the Mustang in 2018, and the 25th for a Ford Motor Company product.

McLaughlin’s awarded victory in Race 30 gives him a tally of 17 race wins in Falcons – tying Dick Johnson’s career tally – of which nine came this season, along with 12 pole positions that secured him the Armor All Pole Champion Award in October.

McLaughlin’s car, DJRTP04, ends its racing life as a Falcon with 17 wins and 29 pole positions, with DJRTP expected to retire the Falcon now that it has sealed the union’s first championship.

The title is the 34th national championship for Team Penske, coming hot on the heels of Joey Logano’s victory in the 2018 NASCAR Monster Energy Cup last weekend, while it is the eighth for Dick Johnson Racing and DJRTP, equalling the record held currently by Triple Eight Race Engineering.

Even the final title-winning margin carried the digits ‘1’ and ‘7’ – 71 points – while McLaughlin was the only driver of the 2018 season to complete every single racing lap.