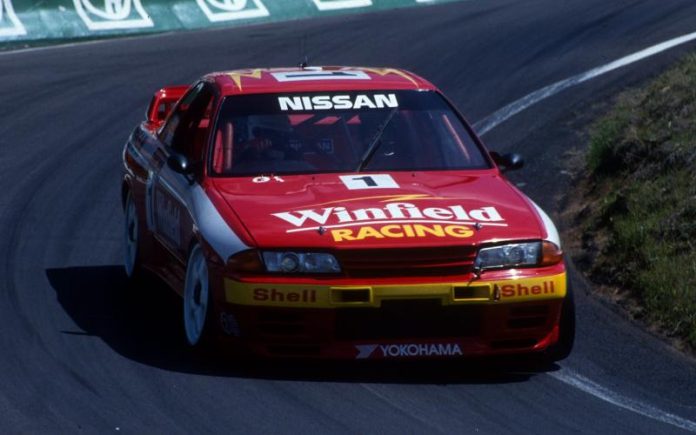 Group A and C Historic cars back in action at Sydney Motorsport Park this weekend- and so is Jim Richards’ ‘ pack of a$#holes’ car!

THIS weekend’s Sydney Retro Speedfest at Sydney Motorsport Park will host the next round of the Heritage Touring Cars championship for Group A and C Historic touring cars.

Now in its second year, the Speedfest event is the first of two trips to SMP for the Heritage Touring Cars in 2015 – the second is the Muscle Car Masters on Fathers’ Day in September.

The field for this weekend’s round sits at 23 cars with 15 Group A entrants and eight Group C runners.

Reigning Group A HTC Champion Terry Lawlor heads the pack in his GIO Nissan GT-R recently sampled by V8 Supercar star Rick Kelly, but he won’t be the only GT-R on the grid.

Tony Alford will make his first appearance in his 1992 Winfield Bathurst winner, the same GT-R that won The Great Race in the hands of Jim Richards and Mark Skaife on that very wet and controversial day at Mount Panorama 23 years ago.

Taking the fight up to the Nissans will be the ex-Japanese Touring Car Championship Sierra of Duncan Mackellar and the ex-Glenn Seton PJ Sierra of Anthony Compton while David Gardner’s ex-Alf Barbagallo Commodore VN will wave the flag for Australia.

Bill Pye may have recently purchased an ex-Seton Sierra but will stick with his ex-Dick Johnson Greens-Tuf Mustang for this weekend, while Chris Stillwell will make his second appearance in his ex-Johnson Shell Sierra after debuting in it at Bathurst.

The Army Reserve Falcon XD of Frank Binding and the ex-Murray Carter XE Falcon of George Nittis will have the Mazda RX7s of Chris Bowden and Phil Verwoert to contend in Group C with as well as the ex-Scotty Taylor Commodore VH of Daniel Cotterill.

Also entered is Steve Axisa’s XU-1 Torana and the Geminis of Gavin Adamson and Darryl Leslight.

They will return to Sydney Motorsport Park on Sunday at 10.20am for a 20-minute race before a 25-minute Trophy race to complete the weekend at 2.30pm.

This weekend’s round is the third of six HTC points-scoring rounds for the season following on from Wakefield Park and Morgan Park.

The Easter Bathurst and Albert Park Australian Grand Prix events earlier in the year were exhibition appearances and not part of the HTC championship.