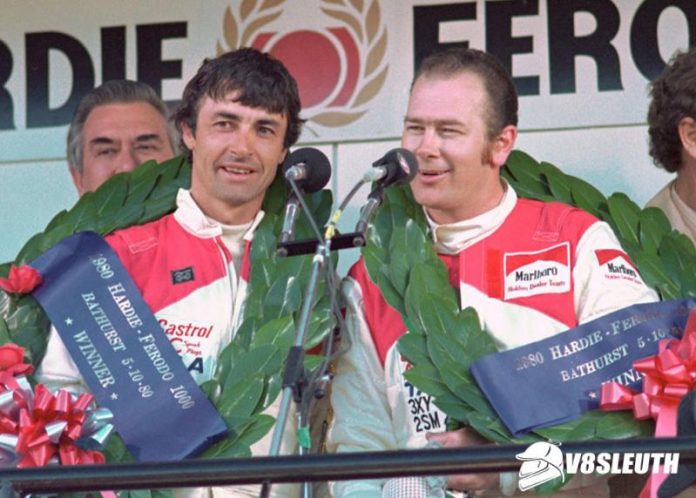 BATHURST has seen a huge amount of ‘dream teams’ over the years with superstar drivers paired together in a bid to win Australia’s ‘Great Race’.

Many of them have lined up at Mount Panorama at the wheel of factory-run and entered Monaros, Toranas and Commodores, here’s five of them from the history books that made their mark.

Peter Brock/Jim Richards – 1978-1981
The Holden hero and the quietly-spoken Kiwi became the perfect combination for the Holden Dealer Team in 1978 when Brock returned to the factory fold after three years as a privateer.

Richards had been a gun in Sports Sedan racing and struggling to make an impression in his own touring car due to funds, though once he and Brock paired together they proved almost impossible to beat.

Peter Brock/Larry Perkins – 1982-1984
With Jim Richards moving to the JPS BMW team in 1982, Brock and the HDT needed a new co-driver for the #05 Commodore for Bathurst and they found it in the form of former F1 pilot Perkins.

In fact, Brock and Perkins remained unbeaten in ‘The Great Race’ given their partnership ended midway through 1985.

In the end their record remained at three starts for three wins, the last three of the Group C regulations at the Mountain.

Craig Lowndes/Mark Skaife – 1998, 2000
While this combination didn’t win Bathurst for the factory Holden team during their full-time racing days together, Lowndes and Skaife remain one of the most potent combinations in the history of the race.

They were brought together as full-time teammates in 1998, victory at Bathurst going begging due to punctured tyres after they’d finished runners-up in the Sandown 500.

The V8 Supercar Championship changed in 1999 with the endurance races made as part of the title chase and HRT elected to split the duo to protect their chances, however they were back together for 2000 and claimed victory in the Queensland 500.

Contact at Bathurst with Matt Neal and Neil Crompton damaged the #1 HRT Commodore, though they managed to finish in the top 10 and the points were enough for Skaife to seal his first championship with the HRT.

They paired up later down the track in 2010 with Triple Eight to score victory at both the Phillip Island 500 and Bathurst 1000, though TeamVodafone – while being Holden-supported – was not the factory team in that period.

Craig Lowndes/Greg Murphy – 1995-1997
The young gun Aussie and Kiwi first paired up with the Holden Racing Team in the 1995 endurance races and linked up in those long-distance races for three years in a row.

Their crowning glory came in 1996 as they swept home to victory in both the Sandown 500 and Bathurst 1000, becoming the first Holden combination to win both endurance classics in the one year since Peter Brock and Larry Perkins in 1984.

Lowndes and Murphy added another Sandown 500 win in the wet in 1997, their partnership a sign of the changing times as young drivers were given more and more opportunities in that era.

Allan Grice/Win Percy – 1990-1992
It’s ironic that this combination was one that then-Holden Racing Team owner Tom Walkinshaw didn’t want given he wasn’t a fan of Percy’s choice of co-driver in Grice in 1990.

But history shows that Percy’s choice was a good one as he and 1986 Bathurst winner Grice paired up to take an unlikely win in the 1990 Tooheys 1000 at the Mountain.

They returned a year later to finish runner-up to the dominant Nissan GT-R at the wheel of the last Group A homologation Commodore – the VN – and won their class in 1992 with fifth-outright as best of the new-for-1993 winged cars.