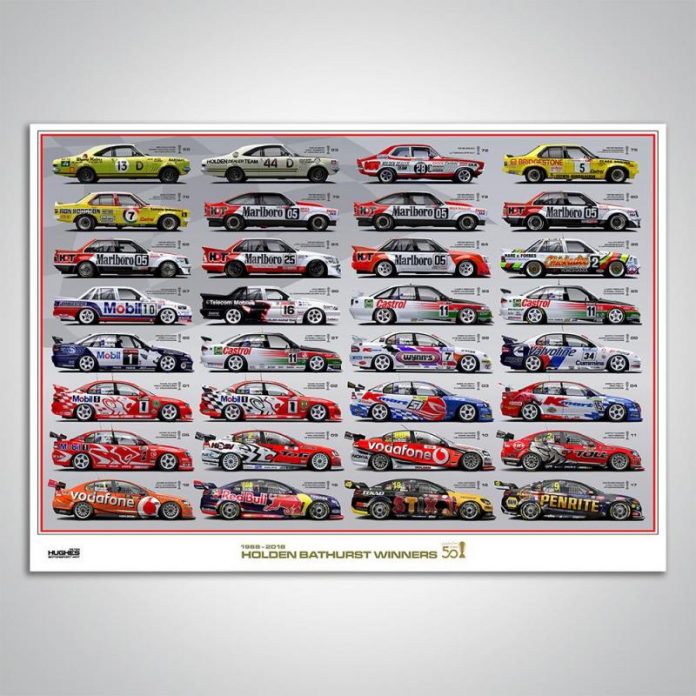 A NEW print by acclaimed automotive artist Peter Hughes celebrating the 50th anniversary of Holden’s first victory in the Bathurst endurance classic has today been launched for pre-order, available here via the V8 Sleuth Online Store.

The print, which has gone on pre-order today, features every Holden winner in The Great Race, starting with the 1968 victory of Bruce McPhee and Barry Mulholland in the HK Monaro GTS 327 through to the most recent victory by David Reynolds and Luke Youlden in the Erebus VF Commodore last year.

The print’s style is synonymous with previous work of renowned Holden exterior designer Peter Hughes with attention to detail at the forefront of his work. His intimate knowledge of the liveries and details on the Supercar era cars comes from often working on the design or in production of the liveries at the time.

The huge 841mm x 594mm print will be produced in strictly limited numbers and will be autographed and individually numbered by Hughes.

The prints release timed on the 50th anniversary of Holden’s first victory in the Bathurst endure is parallel with the release of ‘Holden At Bathurst: The Cars: 1963-2017’ book (available here), a unique limited-edition photographic history of every Holden to compete at the Mountain.

Both items are expected to sell out, so get in early to reserve your copy of two pieces of history.