Home News A FOCUS ON THE NUMBER 7 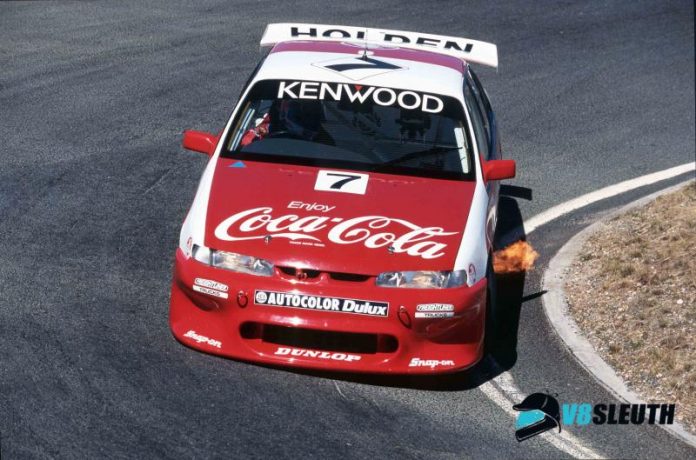 The #7 is lucky for some, a television network or a brand of whisky for others …

The number 7 has a long and successful history on the race tracks of the world.

While #7 is supposed to be a lucky number, most Aussie motorsport fans more closely associate it with Channel 7 given the years of coverage the network gave the sport.

– Sponsored by Channel 7, Bob Morris raced the number for many years.

He found success at Bathurst in 1976 in the #7 Torana L34 with John Fitzpatrick co-driving and again in 1979 when he won the Australian Touring Car Championship in the #7 Ron Hodgson Racing Torana A9X.

– Current Supercars broadcaster Neil Crompton raced with the #7 for much of the early part of his touring car career due to his television links with Channel 7.

Beginning with the third #7 Mobil 1 Racing BMW M3 in 1988, Crompton carried the number through three enduro seasons from 1989 to 1991 with the Holden Racing Team before taking it with him back to Brock’s operation on a VN Group A Commodore for the 1992 ATCC.

For 1993 it featured on his GIO Commodore, before morphing into the Wayne Gardner Coca Cola Racing car for the following seasons.

Gardner himself ran the #7 for the 1997 V8 Supercars season after Crompton departed to compete in the United States.

– Wynn’s Racing/Gibson Motorsport picked up the number in 1998 and featured it first on Darren Hossack’s Commodore and on Steve Richards’ car the following season.

Richards joined with Greg Murphy to drive the #7 Wynn’s Commodore to victory in the 1999 Bathurst 1000, carrying the number over to the 2000 season to feature on his Kmart VT Commodore.

– #7 was long featured on the race cars of Bob Jane, as far back as his Mk IIJaguar. He used the number on a string of cars including his Ford Mustang, Camaro ZL1, Torana and Monaro Sports Sedans, not to mention his Torana GTR XU-1 and L34 touring cars.

Come to think of it, we don’t actually know why Jane ran #7. Do you?

If you do please let us know on our Facebook page here.

– The late Barry Sheene was famous for racing the #7, finding success for his Heron-Suzuki team winning the World 500cc Championship back-to-back in 1976 and 1977.

When asked why he chose to have the #7 as his nominated race number, no-fuss Raikkonen reportedly responded that it was the number that was already on his car from last year so he decided to keep it!

– Plenty of our readers will remember the Eggenberger Texaco Sierra of Klaus Ludwig and Klaus Niedzwiedz from the 1987 World Touring Car Championship rounds at Bathurst and Calder, another #7 race car.

He’d sampled team-mate John Harvey’s brand new #7 Mobil HDT VK Commodore in practice and liked it so much he used it in the race, handing #05 to Harvey.

– In Supercars racing today, the #7 has been used by Todd Kelly for the last 10 years dating back to when he joined Perkins Engineering in 2008 ahead of Kelly Racing being established in 2009.

It began as a reference to Jack Daniels ‘Old No.7 ‘ Tennessee whisky back when the team ran JD Commodores and later Nissan Altimas and has been carried over by Kelly onto his current Carsales.com Nissan.

Can you think of any other awesome racing #7s?

Let us know by commenting on our Facebook page here.