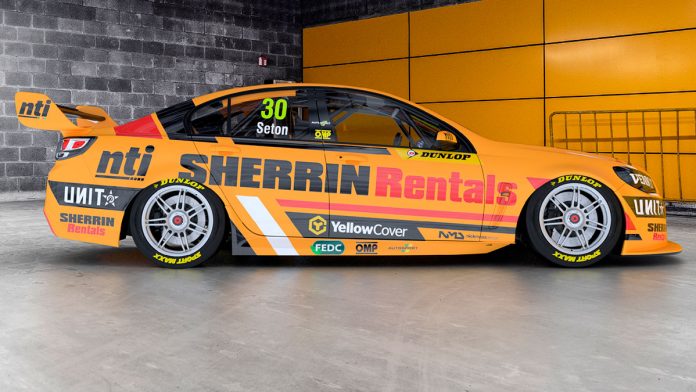 AARON Seton will carry the #30 in his rookie Super2 Series season with Matt Stone Racing.

“To have Sherrin Rentals onboard and joining our Super2 campaign is something I am really looking forward to,” Seton said.

WHAT WE KNOW SO FAR: 2021 Dunlop Super2 Series Entry List

“I first met the Sherrin family through production car racing, and it has been great to get to know them over the years.”

The car Seton will campaign has a good lineage: it’s the same ex-Triple Eight chassis that Todd Hazelwood drove to the Super2 Series title in 2017.

The #30 is synonymous with father Glenn’s Hall of Fame Supercars career. Both his 1993 and 1997 Australian Touring Car Championship victories were earnt in cars carrying the number.

The number hasn’t appeared in Super2 since the 2013 season when it was campaigned by Nick McBride.

Sherrin’s presence neatly bookends MSR’s one-year absence in Super2; the company backed David Russell’s one-off outing with the team at the Mount Panorama round in 2019, a year where the squad’s full-time driver Ash Walsh won the Barbagallo round.

“We have known Aaron and his father Glenn for several years as we competed with them in the Australian Production Car Championship with our two car Sherrin Racing Team,” Michael Sherrin, Managing Director of the Sherrin Group, said.

“We have also enjoyed racing with Matt Stone’s team in 2019 with our comeback to Super2 at Bathurst with David Russell and in the Sandown 500 with Todd Hazelwood where the team showed some great speed.

“We have a lot of confidence in both Aaron and the team, we wish them every success as they compete for the 2021 Championship.”

Seton enters his first Super2 campaign with victories already to his credit in 2021.

He took pole and a race win at the National Trans Am Series at Symmons Plains last month, then backed it up with the overall win in the non-points Tasmanian Ten Thousand at Baskerville Raceway.

Seton will have his first test day in the car at Queensland Raceway on Wednesday 10 February ahead of the opening round of the 2021 Dunlop Super2 Series at Mount Panorama on February 24-26.

Seto: The Official Racing History of Glenn Seton is now available through the V8 Sleuth Bookshop.