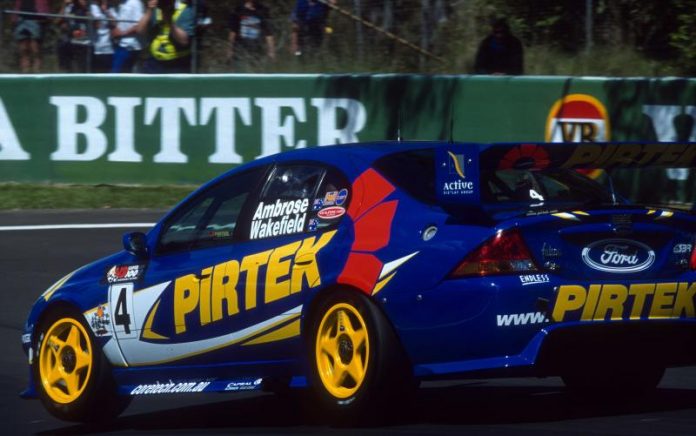 Ford hero’s first Falcon to appear in Sydney on same weekend he debuts his new one!

MARCOS Ambrose may be driving a brand new Dick Johnson Racing Falcon at the Sydney NRMA 500 in his return to V8 Supercar racing, but he’ll also get a reminder about his first Ford on the same weekend.

The Pirtek/Stone Brothers Racing Falcon AU he made his V8 Supercar debut in at Albert Park in 2001 and drove for two seasons will be making the trip to Sydney Olympic Park – and we’re hearing the two-time V8 champ is going to drive it!

Ambrose used the car in 2001 and 2002, claiming his first V8 Supercar Championship round win aboard it at Darwin in ’01 before later that year becoming just the second rookie in history to take pole position for the Bathurst 1000.

Ambrose also raced the car in 2002 and won its final race in both his and SBR’s hands at the Sandown V8 Ultimate in Melbourne before the introduction of the BA model the following season.

The same car then spent time competing in the V8 Supercar Development Series with Paul Cruickshank Racing and Image Racing before joining the expanding collection of car collector Dean Montgomery.

It’s understood that the car, which is being prepared to run, will have Ambrose on board for some demonstration laps over the three-day Olympic Park event.

Talk about heaven for Blue Oval fans – we look forward to seeing Ambrose back behind the wheel of a V8 Supercar in Sydney – twice!