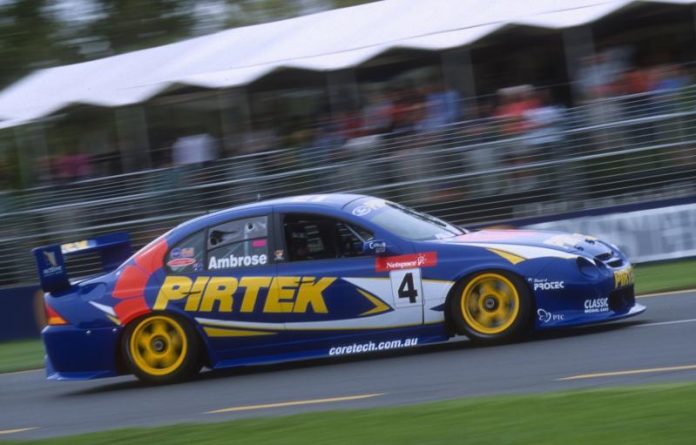 He’s made it in NASCAR in the United States, but what happened to Marcos Ambrose’s first Pirtek Falcon? We have the story …

IT’S hard to believe, but in five years of V8 Supercar racing between 2001 and 2005, Marcos Ambrose only ever raced two actual Pirtek Falcons.

The BA Falcon he carried to championship success in 2003 and 2004 has been the focus of many V8 Sleuth fans enquiries over the years, but so too has the AU model Falcon that Ambrose raced in 2001 and 2002.

That car – the fourth AU Falcon built by Stone Brothers Racing – was debuted by Ambrose at Albert Park in 2001, taking a pole position many of his rivals didn’t agree with, claiming that he cut the circuit.

Ambrose drove it all season, including at Darwin where he claimed his very first V8 Supercar round win (without winning a race!) and then used it to take pole at the Queensland 500.

Greg Crick co-drove with Ambrose at the Queensland enduro but stepped aside for Bathurst, opening the door for Wayne Wakefield to fill the chair in the #4 Falcon.

Ambrose again took pole, becoming just the second rookie (after Klaus Ludwig in 1987) to achieve the feat in his first attempt at Bathurst.

Ambrose retained the car for the 2002 season, where he finished third in the V8 Supercars Championship.

He had Paul Weel co-drive at Queensland and Bathurst before winning the final round in a dominant performance at Sandown – the farewell event for the AU Falcon as Ford’s top-line V8 Supercar machine.

The car became Todd Wanless’ car in the 2003 Konica Series, run by Paul Cruickshank Racing, and also had Owen Kelly behind the wheel for the non-title Konica race on the Saturday of Bathurst – however the car retired early with clutch problems.

In 2004 the car was retained by PCR and was driven as the #65 Actron Air Falcon of Marcus Zukanovic in the Konica Minolta Series, before Phil Scifleet drove it with Doric backing a year later – still run by PCR.

In 2006 the car was sold to Dean Neville and he ran it prepared by Image Racing in the Fujitsu Series, competing in a range of rounds. He drove it in the Adelaide opener of 2007 before updating to an ex-Brad Jones Racing BA Falcon, who this car then sat on the sidelines.

It was bought by Wangaratta driver Mark Shepherd in 2009 and – still prepared by Image Racing – he used it to race in the V8 Touring Car Series in ’09 and 2010.

The car was then sold to a private collector from Victoria, Dean Montgomery, who has it returned to its 2001 Pirtek Ambrose livery and it was actually part of the ’50 Year’ Celebration display at Bathurst in 2012.