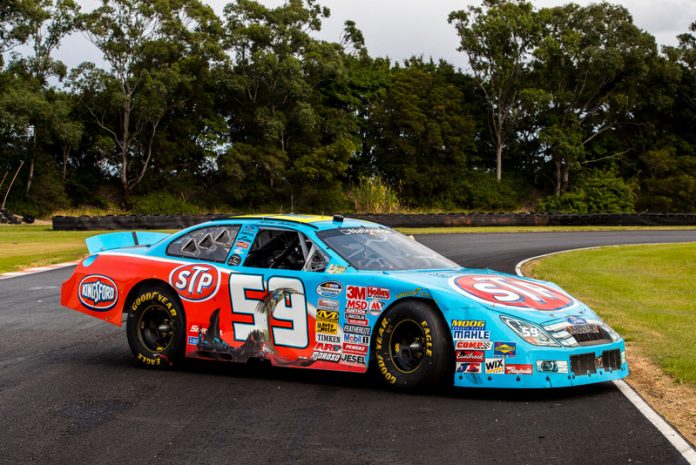 THE STP Ford that Marcos Ambrose drove to his first-ever win in NASCAR competition has hit the market and is currently being auctioned online.

The two-time Supercars Champion drove the car to victory at Watkins Glen in the NASCAR Nationwide Series race in 2008, becoming the first Australian to win a NASCAR race in the United States.

The STP-sponsored JTG Racing Ford Fusion sat in storage in an old workshop in Charlotte for more than a decade before being mechanically rebuilt last year and shipped to Australia.

Owned by former Ambrose PR man Brett ‘Crusher’ Murray, the #59 Ford has not been touched cosmetically since appearing in Victory Lane at the Zippo 200 and still has all the major bumps and bruises as well as the remaining windscreen tear-off strips that were unused during the race.

Original 2008-spec parts, including the Roush Yates Engine parts, were sourced in the United States and the car is now, according to Lloyds Auction house, almost identical to the car that rolled into victory lane at Watkins Glen in August 2008.

Ambrose said he was pleased to see the car back in Australia and hoped it sold to a locally based fan.

“It is great that the car has been held onto for all this time and that it has made its way back to Australia,” said Ambrose.

“I don’t get too emotional about this type of stuff, but it would be cool to have it remain in Australia because of its significance.

“It is quite amazing that the car looks as it did when we rolled it into victory lane.”

The car comes with a new set of mounted road-course racing slicks. Bidding is to end on November 28.