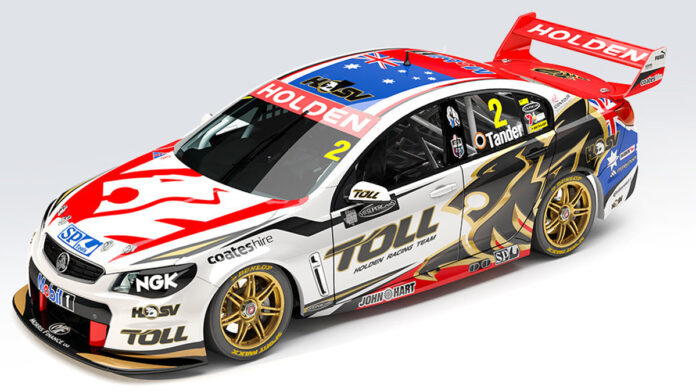 THE unique, one-off liveried Holden Racing Team Commodore VFs raced at the only V8 Supercar round in the United States in 2013 feature as headline announcements made by Authentic Collectables in its latest announcement of upcoming models.

The Perth-based business has confirmed it will make 1:18 models of both Garth Tander’s #2 and James Courtney’s #22 cars from the event that was held at the Circuit of the Americas in Texas.

They featured a special ‘Aussie Made’ livery that incorporated the Australian flag on both the roof and rear quarter panels of both cars which combined perfectly with their striking season livery.

These models, plus all of today’s announcements from Authentic Collectables, are available to pre-order here now on the V8 Sleuth Super Store.

Another car from that Texas round – Fabian Coulthard’s Lockwood-backed, Brad Jones Racing VF Commodore that won one of the four races that weekend, took two pole positions and finished on the podium in all four races – will also be produced by Authentic.

Ford fans will also be catered for with today’s announcements with cars from Tickford Racing and DJR Team Penske to be produced.

The 2015 DJR Team Penske Team Livery Falcon FG X has been announced, the livery used by the team and its drivers Marcos Ambrose and Scott Pye for a range of ride days and promotional purposes across that season.

Tickford Racing fans will also have the chance to buy some cars to fill their collections from previous seasons.

The 2016 Monster Energy Falcon FG X driven to fourth place in that year’s Bathurst 1000 by Cam Waters and Jack Le Brocq is just one of the team’s cars now being produced.

Also being produced is the 2018 Sandown 500 RABBLE.club Falcon FG X driven at Bathurst in 2018 by Richie Stanaway and Steve Owen that featured a flying Falcon down the side to mark the model’s last start in the ‘Great Race’.

And finally, the Mega Racing #56 Falcon FG X driven by Jason Bright at the 2017 Clipsal 500 in Adelaide is also being produced. That year marked the last year of Bright’s full-time Supercars Championship driving career.

All of these models are available to pre-order now via the V8 Sleuth Super Store with delivery expected to be late 2022/early 2023.