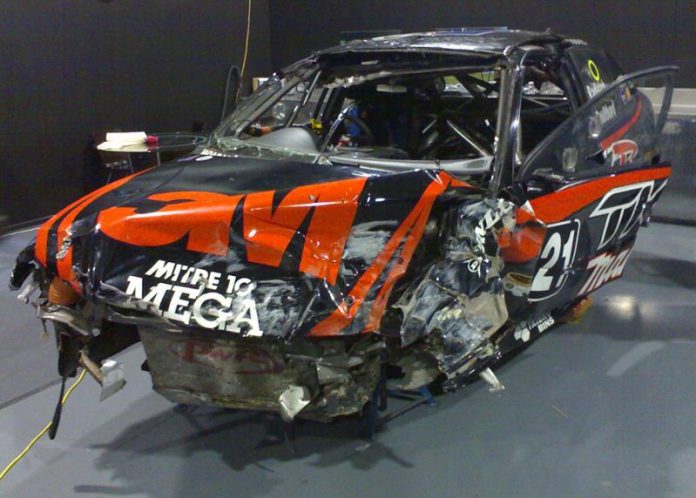 OUR latest APEX Replicas RIP Racer story highlights a car that many will remember for its involvement in a massive accident at Bathurst in 2006 – the Team Kiwi Racing Holden Commodore VZ.

Sadly this car’s racing days were ended at the ’06 Bathurst 1000 when Paul Radisich ploughed into the wall exiting The Chase after tangling with a re-joining Supercheap Auto Commodore.

The resulting impact left the Kiwi trapped inside the car with recovery crews forced to cut open the all-black Commodore to extract ‘The Rat’ from the mangled wreck, the shunt leaving him with back injuries and a badly damaged left foot.

Watch the incident in the video here.

Prior to its career-ending shunt, this particular Commodore was originally built by Paul Morris Motorsport in 2005 and given the name Frank – named in honour of the late Frank Gardner, a heavy influence on the career of a young Morris during his BMW days.

It debuted in Radisich’s hands at the 2005 Albert Park support races as the #021 Team Kiwi Racing car, though run by PMM.

Radisich continued to race this car throughout the entire 2005 sprint race season and claimed the team’s first-ever podium when the series ventured to the Shanghai International Circuit in China.

The car was handed over to Alan Gurr and John Faulkner for the endurance races and the pair scored a top 10 result at Bathurst before Radisich returned to the wheel of Frank for the remaining three rounds of the ’05 season and rounded out the year 15thin the championship poinscore.

The car was retained by the team as the #021 Team Kiwi Commodore for the 2006 season and was again piloted by Radisich and run by PMM until the Bathurst accident.

Following The Great Race the remnants of the car were taken back to New Zealand and ended up on a tour of the county in a bid to raise funds to keep Team Kiwi on track.

The Commodore continuedtouring in 2007 before returning to the Team Kiwi workshop in Hamilton, where our very own V8 Sleuth spied it during 2008 while filming an episode of V8Xtra straight after the debut round in Hamilton that weekend.

Is the wreck still in New Zealand? Or did it get disposed of?

What we do know is that it will indeed never race again!

Read the rest of the series of stories here.

Visit APEX Replicas online store here to shop for a wide selection of model cars covering Supercars, Formula 1 and much, much more.