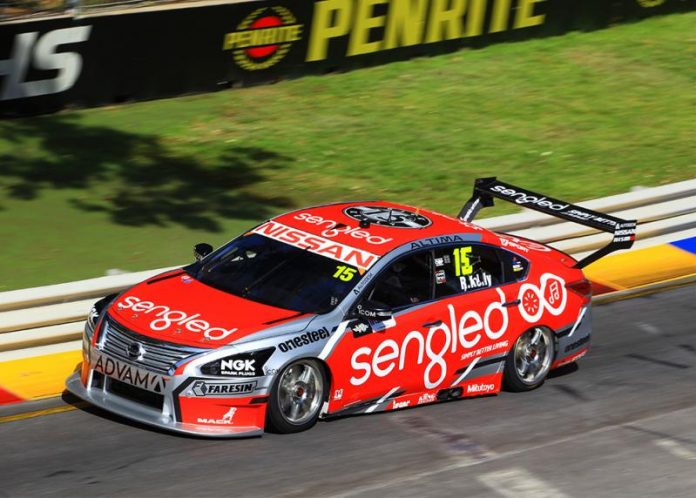 THIS time around our latest APEX Replicas RIP Racers feature story focuses on a Car of the Future-era Supercar that was at the centre of a multi-car wreck that wiped out a third of the field at Symmons Plains last year – Rick Kelly’s Sengled Nissan Altima.

The car – KR 006 – was the sixth Nissan Altima chassis produced by Nissan Motorsport prior to the 2016 season and only lasted until last year when it was involved in a massive crash during the second round of the series in Tasmania.

View the accident in the video below.

Kelly nearly escaped the incident with only minor damage until he was struck in the passenger’s door by Will Davison’s TEKNO Commodore – the impact leaving both drivers out for the weekend and Kelly’s chassis unfit to ever race again.

This particular Nissan made its track debut in February 2016 at Calder Park with Dale Wood behind the wheel while Kelly was busy with sponsor commitments.

He took the wheel a week later for testing at Winton with the car appearing in a white livery prior to announcing Sengled as title sponsor for the season.

The car then made its race debut at the Adelaide 500 and took Kelly to seventh in Sunday’s rain-affected race that was ultimately red-flagged and won by Nick Percat.

Kelly ran the car for the entire championship season, scoring top five results at Barbagallo and Winton before Supercars veteran Russell Ingall joined him for the endurance races.

The pair finished 10that Sandown before failing to finish the Bathurst 1000 due to accident damage in what was Ingall’s last attempt at The Great Race.

Kelly rounded out the year 13thin the pointscore before the chassis re-appeared at the beginning of the 2017 season, wearing an updated livery with continued backing from Sengled.

Kelly managed to grab fifth in the opening race of the season at Adelaide before competing at the Albert Park non-championship event aboard the car.

The Grand Prix support races were this car’s last complete race meeting as the field headed to Symmons Plains in Tasmania where the car was destroyed in the Saturday race.

Following the scary shunt the chassis was sent back to the Nissan Motorsport workshop where it was stripped of its components and sat in the corner.

“There’s no plans for it at present except gathering dust.”