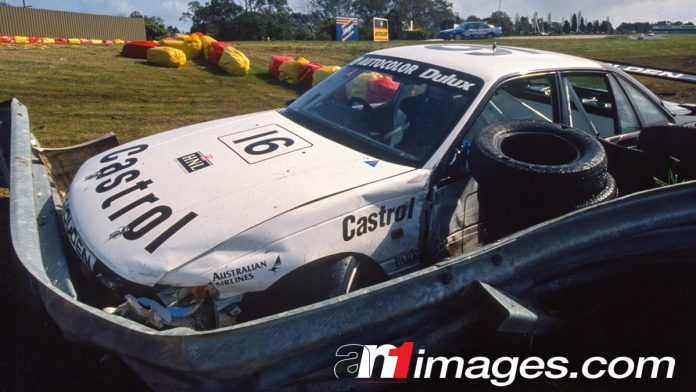 THIS edition of RIP Racers features one of very few Holden Racing Team cars to have been lost to a chassis-destroying crash.

In its short lifespan, chassis HRT 027 earnt the nickname Elvis due to the remarkable number of hits it received!

The car began its life in 1991 as the team’s second-built VN Commodore Group A car and turned out to be one of the least-raced HRT race cars with just five race meetings of competition across nearly two years.

Unfortunately the car only lasted until the start of 1993 where a heavy shunt during a test day at Phillip Island put an end to the Commodore and very nearly its driver, Tomas Mezera.

Worse still, the accident was caused by the installation of an incorrect length bolt in the steering arm that broke on the entry into Honda Corner on Mezera’s out lap!

“The first time I jumped on the brake pedal at Honda Corner on the out lap it broke the bolt and the car snapped left into the tyre wall. I nearly killed myself and nearly rolled the thing. He (Lowe) didn’t last there much longer after that …”

The car had started its life as Neil Crompton and Brad Jones’ car for the 1991 endurance races, the car copping damage from miscues by each of its drivers during the Bathurst 1000 before it ran out of fuel at the Cutting on lap 101.

The HRT took part in only a handful of races in the 1992 season, with new driver Tomas Mezera using Elvis at the Lakeside and Eastern Creek rounds – although this chassis only made it as far as qualifying at the latter after it was badly damaged in a crash on the exit of turn 1.

Repairs were made to HRT 027 and it re-emerged later in the year as the team’s first 1993-spec VP Commodore, complete with Chevrolet engine rather than the normal five-litre Holden V8.

HRT 027 took part in pre-endurance race testing at Mallala before making its race debut as a VP at the Sandown 500 with Win Percy and Allan Grice driving.

But the debut was a tough one – the new-look VP was crumpled twice in practice on its way to qualifying fourth, but retired with a broken tailshaft with less than 30 laps to go.

The traditional pre-Bathurst enduro was ultimately its last race before the Phillip Island testing incident occurred early the following season.

Elvis is one of the hundreds of Holdens that are pictured in our new book Racing the Lion: An Illustrated History of Holden in Australian Motorsport, a 400-page hardcover book paying tribute to the marque’s rich competition history spanning over seven decades.

It’s now in stock in the V8 Sleuth Bookshop – click HERE to order!