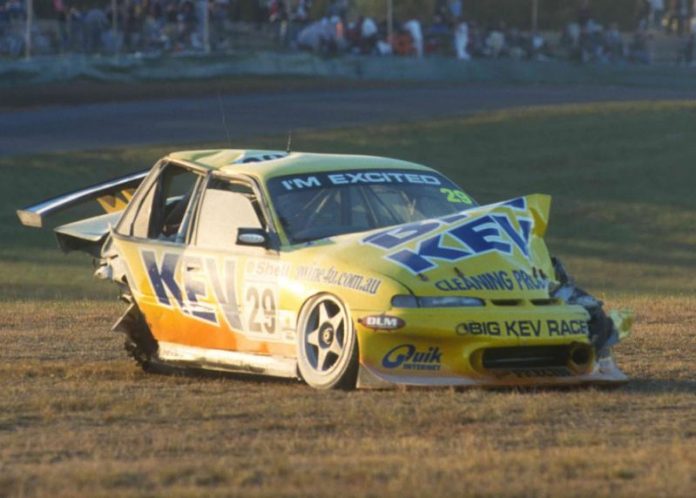 This Commodore did lots of winning, set up a championship victory and came to a spectacular end…

THIS edition of APEX Replicas RIP Racers features a car that was the last of its kind, did plenty of winning in its day and was destroyed in one of the most memorable incidents in Supercars history – the Holden Racing Team’s chassis 035.

Sadly the car only lasted until 2000 where, driven by Paul Morris as the Big Kev Commodore, it was involved in a massive start-line accident at Oran Park when Morris stalled on the grid and was ploughed into from behind by the full-throttle Mitre 10 Falcon of Mark Larkham.

Watch the famous accident in the video below.

The destroyed VS model Commodore was built by the HRT in 1997 and won that year’s Sandown 500 on debut with Craig Lowndes and Greg Murphy at the helm.

Following the car’s debut win at Sandown it was taken to Bathurst and endured a bruising weekend where Murphy crashed entering Mountain Straight in qualifying and Lowndes slipped into the marbles and crunched the wall at Reid Park during the race.

Lowndes then drove this chassis in 1998 and it set up his second V8 Supercars Championship crown with round wins at Sandown, Symmons Plains, Phillip Island, Barbagallo and Calder.

The arrival of the new VT model Commodore put Lowndes’ VS to the sidelines, though it was called upon again for Greg Murphy and Mark Noske to drive as #50 at the Sandown 500, taking pole and finishing sixth.

Lowndes raced HRT 035 for the last time at the 1998 non-championship Gold Coast Indy event while the team spared their new VTs from the notoriously unforgiving street layout.

Former speedway and touring car driver Tony Noske put together a two-car program under the Young Lions banner In 1999 for son Mark and Todd Kelly, acquiring the pair of VS Commodores the HRT had used in ’98.

Noske drove HRT 035 in the sprint race portion of the Shell Championship Series and it was wheeled out for a one-off as Mark Skaife’s #2 HRT Commodore (again the team protecting its inventory of new VT models) for the Gold Coast Indy event.

Repainted yellow, it emerged in 2000 with the backing of cleaning products guru Big Kev and attracted plenty of attention with Morris at the wheel until the moment its active racing life ended at Oran Park.

The high-speed collision sent the on-board fire extinguisher catapulting into Morris’ back through the seat and left therear of the chassis destroyed.

The team stripped it, sold what it could salvage from the wreck and retained the body shell to display at the Performance Driving Centre on the Gold Coast.