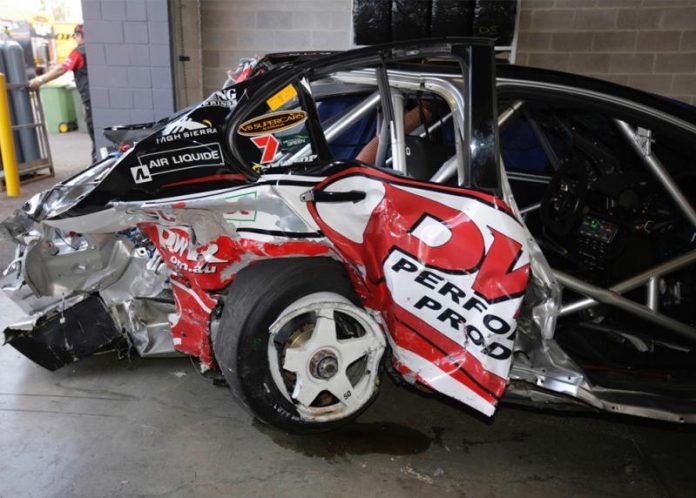 TODAY’S edition of APEX Replicas RIP Racers features a car that had a short racing history, but is unique for later being utilised in a way that no other V8 Supercar ever has.

It’s a car that featured in one of the incidents most played in V8 Supercar highlight reels over the years – the massive crash during practice for the 2008 Supercheap Auto Bathurst 1000 involving Paul Weel and Chris Pither.

Fortunately, both drivers in that terrifying T-bone accident lived to fight another day, but anyone that saw Weel’s PWR Commodore in the aftermath would have written off the mangled wreck from going anywhere but the scrap heap.

The car was completed in 2007 and debuted by PWR Racing at the Queensland Raceway round of the season as the #50 Supercheap Auto/PWR Racing VE Commodore driven by Cameron McConville.

McConville was joined by then-rookie David Reynolds for Sandown and Bathurst but the pair didn’t get to start The Great Race after engine problems sidelined the Holden on the warm-up lap.

PWR retained the chassis for 2008 when it took on a black, white and red livery and was driven by rookie Andrew Thompson with backing from PWR and Hog’s Breath Cafe.

Thompson drove the car in the sprint events with a highest finish of 13th at Eastern Creek before Weel joined him for the enduros at Phillip Island and Bathurst.

The crash that ended this car’s racing life occurred during Friday morning practice at Mount Panorama when Weel lost control at Sulman Park and spun backwards into the concrete barrier.

Pither entered the left-hander at full noise soon after, the current GRM Super2 driver belting straight into the driver’s side of Weel’s Commodore with sickening force, obliterating the car from the B-pillar backwards, but thankfully missing the driver’s door area.

Pither walked away unscathed and Weel, after being transferred to hospital with a ruptured spleen and broken ribs, was able to make a full recovery.

The Commodore was too badly damaged to race again, but it was repaired and sent to the other side of the world by Weel and his father Kees, who donated it to the world-leading FIA Institute in Italy in 2010.

The car became the first ever V8 Supercar to be sent overseas for crash testing with the help of the Australian Institute for Motorsport Safety.

The repaired chassis underwent a major front-on impact that enabled the FIA Institute to understand how safety could be improved in the event of such an accident and, more importantly, use the ‘imprint’ of the car on the wall for further research to be done.

Watch the Commodore undertake the crash test in the video below.

After that, the PWR Commodore was scrapped once and for all.