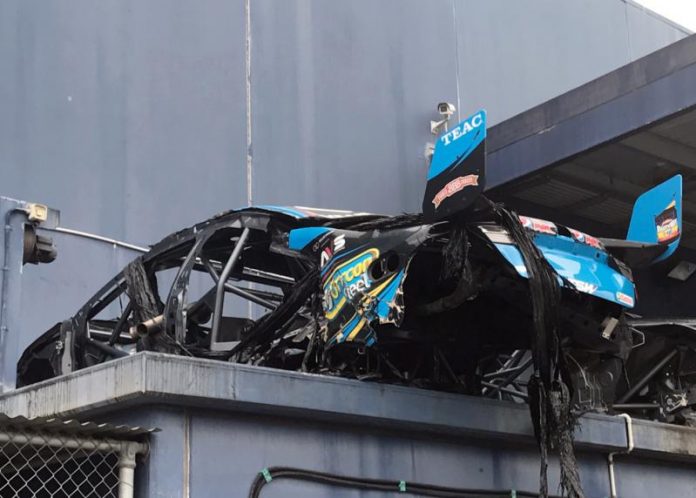 THIS edition of Apex Replicas RIP Racers features a car that won in the hands of a young star and was sadly destroyed in a huge Bathurst accident only three years ago – Chaz Mostert’s 2015 Pepsi Max FG X Falcon.

Mostert showed tremendous speed aboard this car in 2015 before spectacularly crashing out of qualifying at Bathurst in a terrifying accident that left him with a broken leg and wrist – sidelining the young gun for the remainder of the season.

This particular Pepsi Max racer was originally built in time for the 2015 season and became the first brand new Supercar of Mostert’s career, kicking off both the best and worst season for the 2014 Bathurst winner.

Mostert came out of the blocks in style by topping the full-field Shootout at the V8 SuperTest at Sydney Motorsport Park on the car’s public debut and went on to take a podium at the season-opening Adelaide 500 only weeks later.

The Falcon was damaged in an incident with Jamie Whincup during the Sunday race at Adelaide and was repaired in time for the non-championship event at the Australian Grand Prix.

Mostert continued with this particular car for the remainder of the season and took victories at Winton, Hidden Valley, Queensland Raceway and Sydney Motorsport Park along with a range of pole positions.

Cameron Waters joined him in the car for the Pirtek Enduro Cup and the pair finished second to teammates Mark Winterbottom and Steve Owen as part of a Prodrive Racing Australia 1-2 at the Sandown 500.

The historic ‘500 would be the last time this car raced as its racing life came to a terrible end on the Friday at Bathurst when Mostert clipped the inside wall on the run towards Forrest’s Elbow.

Watch the accident in the video below.

The impact left Mostert out of action for the remainder of the season with the post accident analysis spurring on the introduction of driver leg protection devices that are now mandatory in Supercars competition.

The Falcon was torn apart in the accident, leaving it too badly damaged to ever race again.

The leftovers of the chassis – FPR 1218 – are stored at Tickford Racing headquarters in Melbourne.