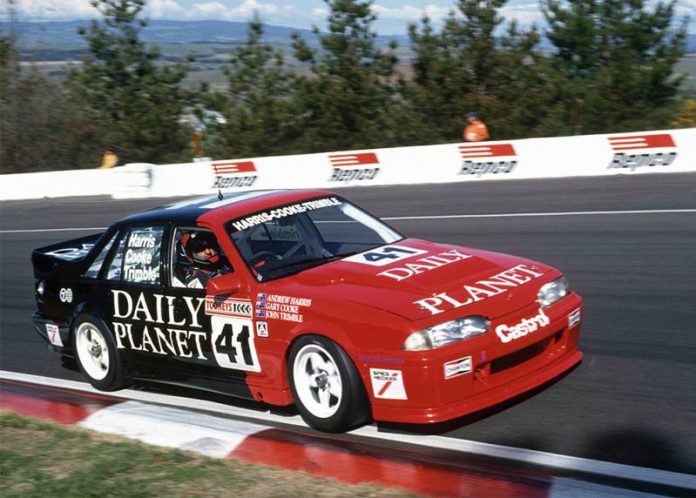 TODAY’S Apex Replicas RIP Racer is a VL Commodore that was built by Perkins Engineering and went on to race overseas before being crunched in a memorable race-ending moment at Bathurst – Larry Perkins’ 1990 VL Group A SV Commodore.

This car was debuted by Perkins at the opening round of the 1990 Shell Ultra Australian Touring Car Championship at Amaroo Park and competed over the course of three seasons of Group A touring car competition, both in Australia and offshore.

The car was originally built at the beginning of 1990 and took to the track as the #11 Perkins Engineering car for the entire championship with Larry himself at the helm.

Perkins had a tough run during the 1990 season as the heavy V8 Commodores struggled to keep up in the sprint race format with the turbo Sierras and Skylines.

He and the car scored a best result of seventh at Winton, Mallala and Wanneroo leaving the Holden legend 11thin the final point score of the championship.

His Melbourne-based team debuted a new car for the endurance races, however still took the ATCC sprint series car (chassis PE 009) to Bathurst, where it was used as a practice car (marked #11T) by Perkins and co-driver Tomas Mezera.

The car was sold to the Indonesian President’s son Tommy Suharto, who raced it in his home country.

Perkins himself also went to Indonesia to help Suharto out, the pair claiming second place in the 1990 Indonesian Grand Prix – just what else was in the field that day we’re not sure!

The car remained with Suharto in 1991 and raced in Thailand and Malaysia before returning to Australia at the back end of the year where Perkins’ team prepared the car for another Indonesian driver, Chandra Alim, to race in the Australian Grand Prix support races in Adelaide.

The car stayed in Australia in 1992 and was leased by the Daily Planet team as part of a two-car team for that year’s Tooheys 1000 at Bathurst.

Andrew Harris and Gary Cooke drove the car as the #41 entry with John Trimble joining them for the race as third driver after his #22 Commodore caught fire during practice and was withdrawn.

They circulated all day until a spectacular rainstorm hit the Mountain in the closing stages and the car slid off the road, ending up in the race-ending crash that also claimed eventual winner Jim Richards.

Sadly, the car wasn’t in such a good position, Perkins Engineering reporting on its Facebook page recently of its fate post Bathurst 1992.

“We still have some parts and hardware that were removed off this chassis when it was stripped to a body shell!”

Read the rest of our APEX Replicas RIP Racers stories here – we’ve covered a range of amazing and interesting cars over the course of the year!