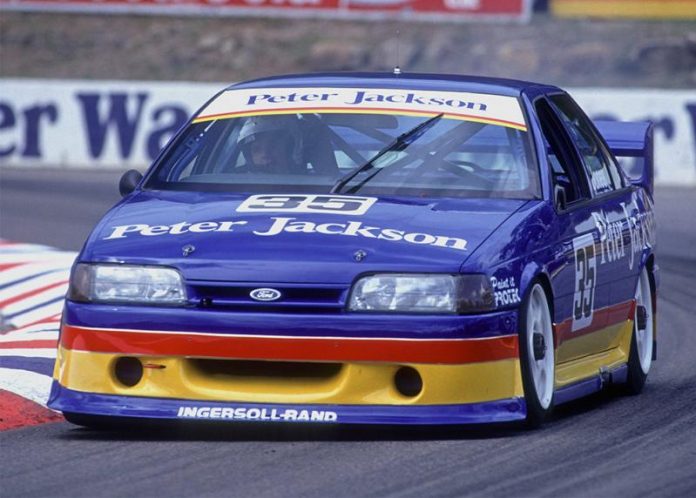 Following on from our last Apex Replicas RIP Racer featuring the first Falcon built by Glenn Seton Racing – click here to read – we detail the second of the team’s Falcon’s that is also sadly no more – GRS2.

This particular Falcon was originally built at the beginning of the 1993 season to kick off the new V8 era of Australian touring car racing and debuted in the hands of Glenn Seton at the Winfield Triple Challenge event at Eastern Creek, taking overall victory with a pair of race wins.

It was then handed over to Alan Jones and raced as the #35 Falcon for the Shell Australian Touring Car Championship, claiming round wins at Symmons Plains (after controversial hits with Wayne Gardner and also Mark Skaife) and Lakeside with podium finishes at Phillip Island and Eastern Creek along the way.

Watch Alan Jones’ Symmons Plains incidents in the video below.

It made its last racing appearance in the wet Barbagallo round in July 1993 in Jones’ hands before it was written-off in a testing crash by Drew Price at Phillip Island later that month.

The former factory Toyota driver – who had driven for Seton in the team’s second Sierra at Bathurst in 1990 – locked the rears towards Honda Corner and hit the earth bank at 200km/h, necessitating the speedy build up of another car (GSR4) in time for the series final at Oran Park.

“It was just a big head on,” Seton told Motorsport News at the time.

“Everything at the front was gone and the shell was bent all the way back.”

The damage to GSR2 was such that it was declared a write-off and the chassis destroyed. Sadly it’s another early Falcon V8 from the start of the five-litre era that is no longer in existence for blue oval fans to enjoy.

You can read the history of this carand every other Falcon Supercar built in our 240 page publication ‘The Falcon Files’ available for purchase here in the V8 Sleuth Online Store!