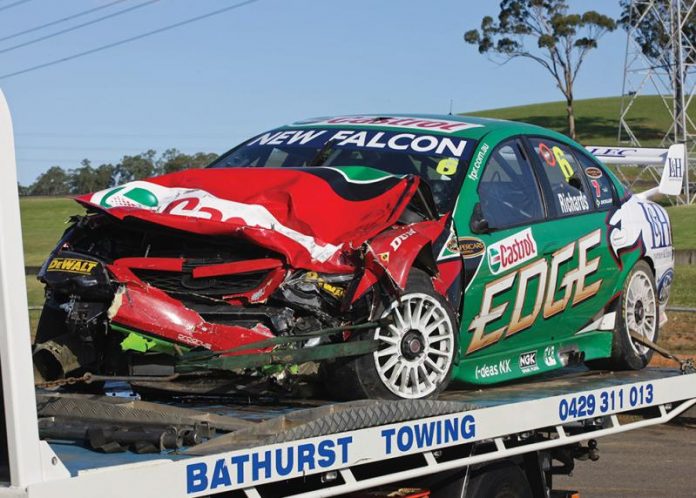 THIS edition of APEX Replicas RIP Racers features a car that was involved in some unique incidents, almost won Bathurst and ended its life in a massive accident at Eastern Creek – Steve Richards’ #6 Castrol EDGE BF Falcon.

Ford Performance Racing completed the build of this car – FPR 604 – ahead of the 2007 season for their new signing Steven Richards, who had defected to Ford from Larry Perkins’ Commodore squad.

Richards debuted the car in the opening round of the season at the Clipsal 500 in Adelaide and recorded 11thand eighth in the opening two races of the year.

He ran the car in the next round at Barbagallo in Perth before it was rested for the next four rounds and returned to action from Queensland Raceway onwards.

Richards took second overall in the Jim Beam 400 at Oran Park and then teamed with Owen Kelly to take third place in the Sandown 500 before the Falcon was re-liveried for Bathurst into a split Castrol/Orrcon colour scheme, allowing Richards to team up with regular teammate Mark Winterbottom for the big race.

Winterbottom took the car to pole position and was leading the pack until he speared off in the wet in the late stages at the Chase and eventually finished 10th after the race went off – as Neil Crompton famously exclaimed on the TV coverage at the time!

Relive the 2007 Bathurst incident in the video below!

This chassis reverted to Richards’ hands for rest of the 2007 season and finished runner-up in the Symmons Plains round a fortnight after it was lucky to escape without damage in Bahrain – where it fell off the back of a truck while being transported to the circuit!

Richards ran this chassis at the start of 2008 however it was crashed heavily in round two at Eastern Creek and destroyed. In fact, the ‘jaws of life’ had to be used back at the workshop to get the engine out!

Chassis 604 remains at Tickford Racing in Melbourne and the remnants of the Falcon sit outside the team’s workshop – it will never race again.