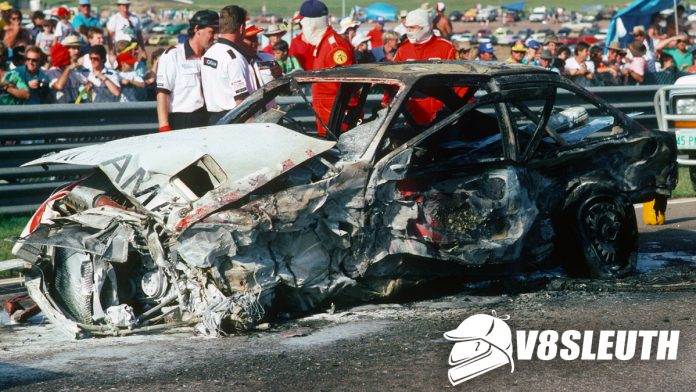 OUR RIP Racers series of stories returns with a look at a car that had a short run in Group A racing and was destroyed in one of the biggest accidents Australia has seen – Andrew Miedecke’s Kenwood Ford Sierra.

The RS500 Sierra met its demise in a multi-car accident at the Lakeside round of the 1989 Shell Ultra Australian Touring Car Championship in which the car was completely destroyed.

The accident was triggered by a touch between Miedecke and John Lusty’s Commodore through the fast left-hander at the back of the circuit while the former was chasing Peter Brock’s Mobil Ford.

The resulting contact caused both cars to fire off the road and into the armco barriers with Miedecke’s car bursting into flames before being collected by the following Sierras of Glenn Seton and Murray Carter.

Luckily no one was seriously hurt in the accident as cars continued to fly by the stricken cars while drivers were fleeing the scene.

“It was a racing incident, I can cope with that,” Miedecke told Auto Action at the time.

“But for the rest of the field not to be slowed down… I don’t enjoy playing Russian roulette.”

Privateer racer Kevin Waldock actually owned the Sierra at the time of the accident and had loaned it to Miedecke who was working on the build of a new car.

The destroyed car’s fate was ironic given the reason for its existence: it had been built less than two years prior to replace another destroyed Sierra!

Don Smith’s violent rollover in final practice for the 1987 Castrol 500 at Sandown forced the team to build up a new car for he and Miedecke to race at that year’s James Hardie 1000, which served as a round of the inaugural FIA World Touring Car Championship.

The red #35 OXO Sierra was the highest-placed local entry on the grid, Miedecke mixing it for the lead with the overseas-built Sierras of Steve Soper and Andy Rouse in the early stages – in fact, it was the Australian RS500 that ended up setting the race’s fastest lap!

However, Miedecke and Smith lost ground through an ill-timed pit stop under the Bathurst 1000’s first-ever Safety Car period – the rules of the time closed the pit lane soon after the Safety Car train had passed pit exit, costing them a lap – while alternator troubles left them to finish a lowly 17th.

The car continued to be raced by Miedecke during the 1988 season as the outfit morphed into Miedecke Motorsport, but a shortage of funding prevented him from repeating his 1987 Bathurst form.

Mechanical failures also hurt; Miedecke was pressuring eventual winner John Bowe at Winton before a turbocharger problem put him out, while pole at Sandown turned into a lap-one retirement with a burnt-out clutch.

While mechanical problems scuppered their races at Bathurst and Wellington, the pair won the Pukekohe 500 despite losing three laps in the early stages repairing a damaged oil cooler.

The car was rebranded in Kenwood colours for the 1989 season and Miedecke drove it until the Lakeside crash.

He returned to racing just a few months later in the brand new car that had been destined for Waldock, though will always remain lucky to have escaped from this serious accident that burnt his previous Sierra to a crisp.