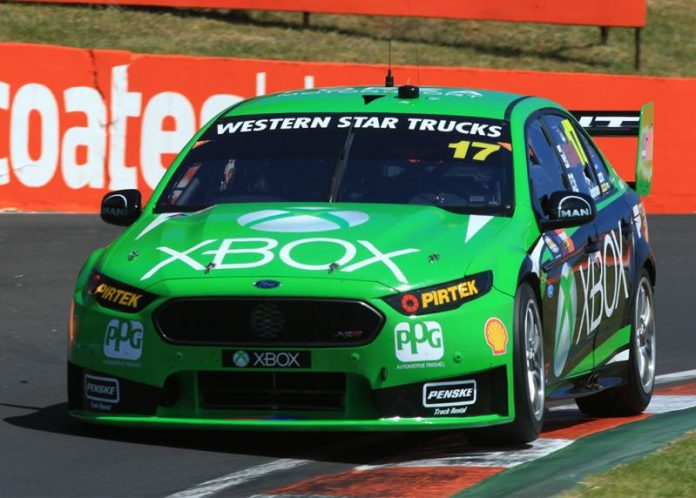 OUR latest story in the series of APEX Replicas RIP Racers takes a look at one of the younger cars from Australian motorsport that is sadly no longer with us – the XBOX-sponsored DJR Team Penske Falcon from the 2015 Supercheap Auto Bathurst 1000.

However, Ford fans can be thankful for its service in starting the resurgence of the blue oval and Dick Johnson’s legendary team in partnership with Roger Penske.

The car – DJRTP01 – enjoyed a strong run at Bathurst in October 2015 driven by Marcos Ambrose (in his first ‘1000 in 10 years) and Scott Pye, though steering failure pitched Pye into the wall at Reid Park on lap 138 of The Great Race and the resultant damage left this chassis a write-off.

Sadly this car will never see a Supercars race track ever again, its racing career over.

It first appeared in November 2014 ahead of the much-hyped return of Marcos Ambrose from America ahead of the 2015 season.

Ambrose completed a media ride day at Lakeside in late ’14 marking the Tasmanian’s first laps in a Supercar since Phillip Island in 2005 with a range of media and special guests going for rides.

The Tasmanian raced the car in the 2014 season-ending Sydney NRMA 500 as the #66 XBOX entry in his 66th V8 Supercar Championship round start, giving the two-time champion much needed race time in Supercars ahead of the planned 2015 campaign.

Ambrose raced this chassis in 2015 in Wurth colours at the non-championship Albert Park event before sensationally stepping down from full-time driving afterwards.

This car was repaired from damage sustained at Albert Park and was next used in the team’s chassis rotation, next appearing at Perth in MTU colours with Pye driving.

Pye took the car to a fourth-placed finish at Hidden Valley (its best Supercars race result of a very short life!) and also raced it at Queensland Raceway.

This chassis then became the team’s endurance car for Sandown and Bathurst with XBOX backing and Pye and Ambrose driving.

Visit the APEX Replicasonline store here to shop for a wide selection of model cars covering Supercars, Formula 1 and much, much more.

Watch the replay of the crash that destroyed this car below …