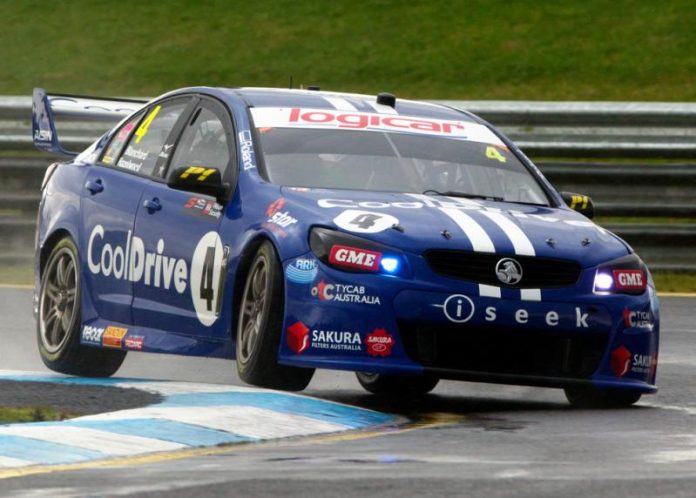 OUR latest story in the series of APEX Replicas RIP Racers stories features a car that had a brief race history and met its demise in a spectacular incident that showed just how far motorsport safety has come – the Tim Blanchard Racing, Brad Jones Racing-run CoolDrive VF Commodore.

BJR completed the build of the car – BJR 005 – at the beginning of 2015 and first wheeled it out for a shakedown at Winton in June of that year where the team nicknamed it Alice the Snow Leopard!

Unfortunately the car only raced until last year’s Sandown 500 where current Super2 Champion Todd Hazelwood had a very serious incident in Saturday’s qualifying race, launching the car into a series of rolls at the end of the back straight after contact with Jonathon Webb.

Check out Hazelwood’s massive incident in the video below.

The car actually made its racing debut at Hidden Valley in 2015 in the hands of Fabian Coulthard as the #14 Freightliner Racing Commodore with the Kiwi giving the car its first podium on debut, taking third in the final race of the weekend.

Coulthard raced it for the remainder of the season taking three more podium finishes at Townsville and Sydney Motorsport Park on his way to seventh in the championship.

The car was wheeled out again in 2016 with Tim Blanchard taking it over as the #21 Team CoolDrive Commodore.

Blanchard ran the car through the entire season, taking a season-best 10thplace at Bathurst in combination with BJR Super2 driver Macauley Jones.

Current Porsche GT3 Cup Challenge racer Chelsea Angelo also cut laps in the car at a ride day in late August following the Sydney Motorsport Park round of the Championship.

The chassis remained in the hands of Blanchard in 2017, though running under a Racing Entitlements Contract his family had acquired from Super Black Racing.

Blanchard drove the car through to the Sandown 500 where ‘Alice’ was renumbered to #4 and changed into a retro livery celebrating Norm Beechey’s Mustang that won the 1965 ATCC at Sandown.

Following Hazelwood’s massive accident at Sandown the car was stripped back in Albury with the resultant damage ensuring the car will never race again. Our V8 Sleuth Aaron Noonan snapped the photo of the chassis that’s included in this story as it sat outside the team’s workshop while visiting in January this year.