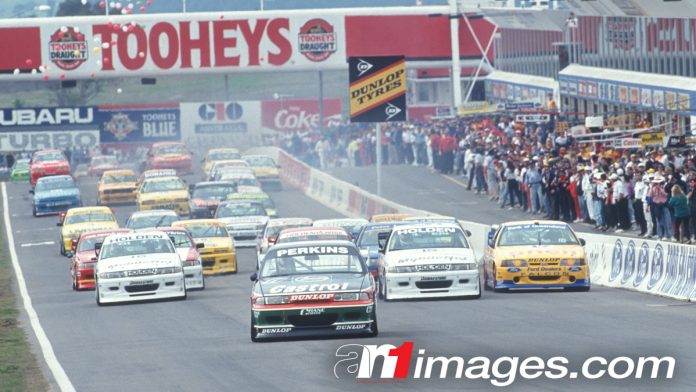 THREE new DVD titles will be released in time for Christmas 2020 with fans of Australian motorsport of the 1990s and the early 2000s well catered for.

All three titles are available to pre-order here now and will be arriving in time for Christmas.

For the first time, the 1993 Tooheys 1000 at Bathurst – won by Larry Perkins and the late Gregg Hansford – will be released in full on DVD.

A field of 45 cars lined up for the ’93 Bathurst race, Commodores sealing the first five positions of the 23 cars that finished the 1000-kilometre classic.

Included on this release is the full race day telecast, including the pre-race festivities, highlights of the Tooheys Top 10 Shootout, the HQ Holden support race and then the ‘main course’, the 161-lap race.

This release also includes a range of unseen vision too. Included on this DVD is the race action that unfolded while television viewers of the day were busy watching commercials.

Another title in the ‘Seven Sport Magic Moments of Motorsport’ series focuses on three rounds of the highly competitive 1995 Australian Touring Car Championship.

This title features the Sandown, Mallala and Barbagallo rounds and, where possible, all of the action filmed during the commercial breaks has been included on this DVD.

Finally, volume 6 of the Classic Australian Motorsport series will feature the 2002 and 2003 Bathurst 24 Hour races. This title features re-edited highlights from the Channel 7 broadcast of those races, taking in the Sunday afternoon ‘run to the flag’ of the 2002 race as well as the early and closing stages of the 2003 race.

Both 24 Hour races were won by the Garry Rogers Motorsport-run Monaros, each winning car featured in a limited edition set of Peter Hughes Motorsport Art prints, available to order now here from our online store. They are limited to just 427 copies each.

In 2002 it was Garth Tander, Steve Richards, Cameron McConville and Nathan Pretty who scored victory, though they were forced to settle for second place in a Holden 1-2 the following year as ‘King of the Mountain’ Peter Brock, Greg Murphy, Todd Kelly and Jason Bright sealed a narrow win.

All three DVD titles are set to be released in early November.

Order your motorsport DVDs via the V8 Sleuth Online Bookshop here now, we stock a wide range of DVDs, books and collector prints for every motorsport fan – gift cards for Christmas are also available!