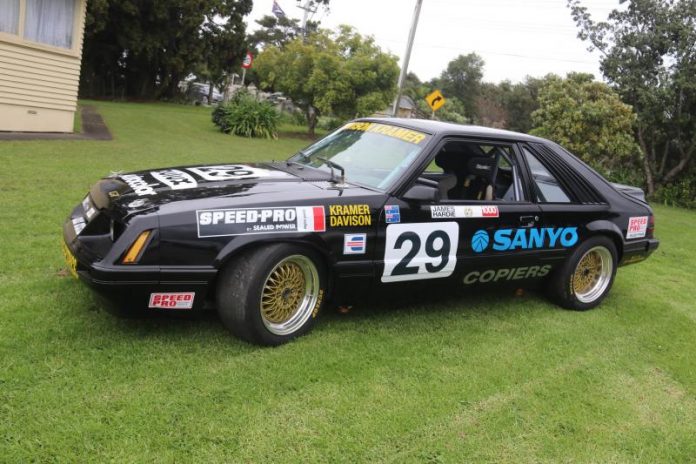 There were only a handful of Mustangs raced in Group A in Australia – and it could be yours!

THE return of the Ford Mustang to top-level competition in the Virgin Australia Supercars Championship in 2019 has got a lot of people excited with Mustangs from years gone by being brought back into focus.

One of these cars has been off the radar for quite some time but now has re-emerged fully restored and looking for a new home!

The Group A Mustang raced by Ken Davison and Wally Kramer at Bathurst in 1985 and 1986 has recently been restored by Kiwi Mustang guru Ken Hopper and has just been listed here on the V8 Sleuth Classifieds Powered by Authentic Collectables page.

Hopper was responsible for the restoration jobs on the ex-Dick Johnson Greens-Tuf Mustang and also the Kiwi-run Pinepac car (for which he was chief mechanic in the 1980s), his work on the Davison/Kramer car seeing it returned to how it raced at Bathurst in 1986.

In fact the ex-Davison/Kramer car had plenty of racing history on both sides of the Tasman, competing in both Australia and New Zealand (including in the Wellington 500 street race) over the course of its life in the Group A competition period.

The distinctive black Ford turned laps earlier this year at the ‘Legends of Bathurst’ event at Hampton Downs in New Zealand and is sitting, ready to go, in Auckland.

The car includes its original CAMS logbook from its time racing in Australia as well as its MANZ logbook from New Zealand, making it a desirable car for Historic Group A competition eligible for use worldwide.

“This is the last remaining car that was at Bathurst in the ’85/’86 era, so it seemed right for me to restore it,” says Hopper.

“The car has come up really nicely and has all of the key components that pertained to that era, meaning all Harrop suspension, steering and brakes.”

The car comes with a spares package including eight spare wheels, spare gearbox (Getrag but stock road car box, will bolt in as a ‘get out of jail’ option!), complete front nose clip rubber and inner support frame as new (that are very rare and a difficult part to find), two front guards, hood, left hand, right hand doors, rear hatch complete with glass and rear wing, a spare engine complete with competition sump and MSD distributor, rear diff housing with ring and pinion and spool centre.

The Davison/Kramer Mustang was only one of a handful raced in Australia during the Group A era – two were raced by Dick Johnson’s team, the Kiwi Pinepac team had two (including one ex-Barry Seton) and privateers Lawrie Nelson and Kevin Clark ran Mustangs as well.

Click here to view the full classified ad for the Davison/Kramer Mustang.