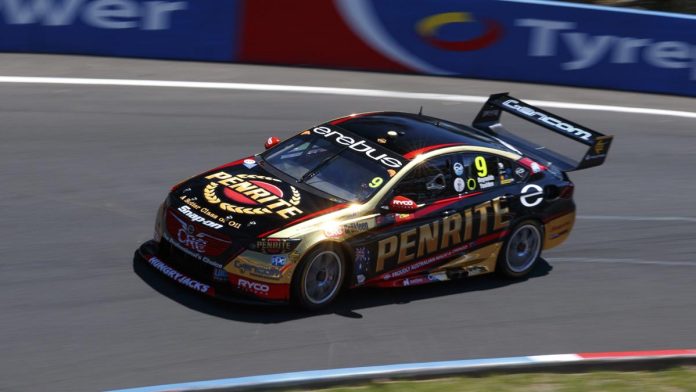 THE HOLDEN Commodore that David Reynolds drove to a sensational pole position for the 2018 Bathurst 1000 will return to action at the next Repco Supercars Championship event at Sandown.

Erebus Motorsport has confirmed it will press its spare car, dubbed EMH02, into service for Will Brown after the rookie’s heavy crash during practice at the Repco Mount Panorama 500.

Brown clipped the left-hand apex wall on the way through The Dipper during Friday’s opening session, which shot the WD-40-backed Commodore hard into the concrete on driver’s right.

The team worked until the early hours of Saturday morning to repair the car so that Brown could take part in the weekend’s action, but it will now be taken out of service for a full workshop rebuild.

“It needs too much work,” Erebus CEO Barry Ryan told V8 Sleuth of the crashed car, EMH04, which was built new for Reynolds to race in 2020.

“That car will go back to Jimmy’s [team fabricator James White] and get repaired and we’ll just transfer everything into that [spare] chassis.

“That chassis is sitting at work, it’s already got a wiring loom and half the plumbing and stuff, so it’s half-built already.”

The returning EMH02 was built new for Reynolds ahead of 2018 and campaigned as the #9 Penrite Racing entry for two complete seasons.

That included scoring pole position and dominating much of the Bathurst 1000 in 2018 before Reynolds famously suffered from leg cramps, curtailing a likely second straight Bathurst win.

A year later the car was heavily crashed in Thursday practice at Bathurst by co-driver Luke Youlden, before being repaired to finish the 1000km race fifth and complete the season.

It has sat as a spare since the introduction of EMH04 at the start of 2020.

According to Ryan, Brown’s hit on Friday caused even more front-end damage than Youlden’s shunt two years ago, but the fact the rear escaped largely unscathed this time was a major time-saver.

Even so, Brown’s entry was very nearly withdrawn from the weekend.

“James actually called it at one point and said ‘we should put it in the truck, it’s that bad’. I told him to wash his mouth out with soap!” said Ryan.

“We’ve been working together since 2003 and I’ve never heard him say that he can’t repair a car.

“I said ‘let’s just spend a couple of hours pulling it apart and seeing if we can make a better evaluation of it’. I think he saw that I wasn’t going to let him not fix it and we just pressed on!

“The team did an awesome job of fixing it, as good as you could do at the track.

“The chassis rail was twisted over and pushed back. We managed to twist it back, but we couldn’t pull it forward because you just can’t [at the track].

“The right-hand side of the car is actually shorter by about 10mm. We had to sort of tweak the suspension to get the wheelbase more even left to right, which then upset some other things.

“We got it to the point where it was good enough to race, but it was never going to be a pole-winning car. Will did a sensational job because the car definitely wasn’t at its peak.”

Brown took the repaired car to 16th and 14th in the two races and sits 17th in the championship, six places behind teammate Brodie Kostecki.

Erebus is one of two teams preparing a spare car for the March 20-21 Sandown SuperSprint after a heavy Bathurst hit.

The Blanchard Racing Team is set to wheel out its spare Ford Mustang following Tim Slade’s crash on the run to Forrest’s Elbow late in Saturday’s race.