Home News Bathurst BATHURST RUNNER-UP GETS ITS DODO BACK ON 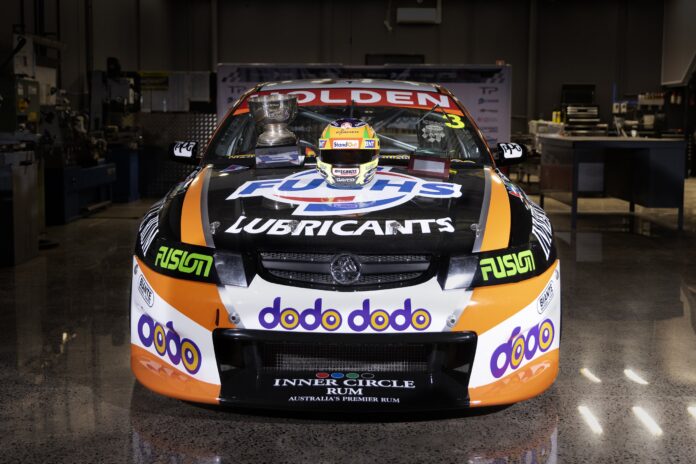 THE Tasman Motorsport Commodore VZ that Jason Richards and Jamie Whincup drove to a pair of podium finishes in the Sandown and Bathurst V8 Supercar endurance races in 2005 has been painstakingly returned to its original livery.

The Dodo car finished third in that year’s Sandown 500 – marking the first V8 Supercar podium finish for either driver – and then finished runner-up at Bathurst as Richards chased Mark Skaife’s HRT Commodore to the finish line.

The very same car was also the same chassis that Richards was driving when barrel rolled down the road in a frightening accident at Queensland Raceway earlier in the year.

Tim Pattinson from TP Restorations & Replicas has undertaken the work and turned the clock back for the car and its owner, Marty Miller.

Pattinson used original files from the team’s original signwriter, along with sourcing series and event logos from Supercars, to restore the chassis back to how it raced at Mount Panorama back in 2005.

“It was a project first mooted back in May and the car arrived in Melbourne during lockdown in late August and was completed in time for Challenge Bathurst.

The restoration project was filmed over five days at two different locations, a workshop in the south-east of Melbourne and also Sandown Raceway, the site of the car’s podium finish in 2005.

The second video documenting the car’s return to Tasman colours will be released tomorrow (Thursday November 25).

“It has been a great privilege and honour to recreate this car for the owner,” says Pattinson.

“Marty allowed me to have his car and do whatever was required to get it back to how it was when the Tasman boys achieved great things at Bathurst back in 2005.

“It has also been an honour to do the best job possible for Charlotte (Richards, Jason’s wife) and Jamie (Whincup).”

In addition to being the car that Richards and Whincup drove to podium finishes in 2005, the chassis is the same one the former drove to his only V8 Supercar race win at Winton in 2006.

The Kiwi, who passed away in December 2011, raced this chassis for the majority of 2006 before it was turned over to teammate Andrew Jones for the final rounds of that year’s championship.

It was later raced by Dale Wood for Greg Murphy Racing in the Fujitsu Series in 2007 and 2008 and was acquired by its current owner in 2015.

The car now sits on display at the National Motor Racing Museum at Mount Panorama, so fans will be able to see it during Repco Bathurst 1000 race week.