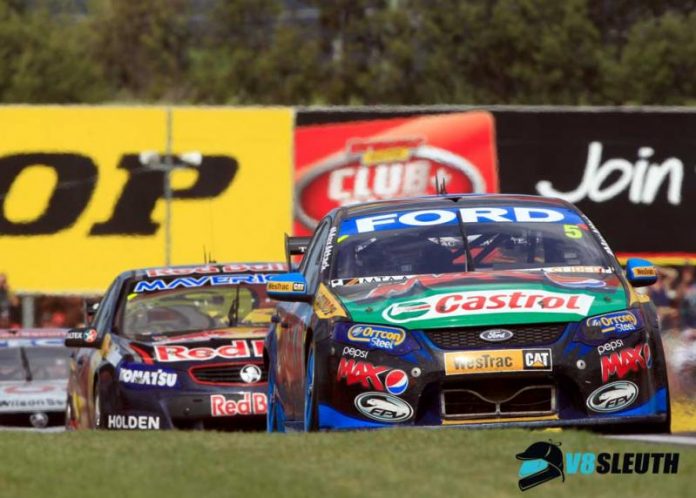 THE Pepsi Max Crew Falcon that took Mark Winterbottom and Steve Richards to victory in the 2013 Supercheap Auto Bathurst 1000 is making a return to Supercars racing this weekend at Symmons Plains in Tasmania.

Tickford Racing will wheel out the former Bathurst-winning chassis for its Dunlop Super2 Series driver Thomas Randle, whose regular car was damaged in the opening round in Adelaide.

The car he will drive in this weekend’s second round of the Super2 Series was raced in the category last year by Josh Kean in Wynn’s colours and had started this season as a spare car.

In fact, the car has a very long history, first hitting the circuit for Car of the Future testing in late 2012 before being driven by Winterbottom in 2013 in Pepsi Max Crew colours and David Reynolds for the majority of 2014 in The Bottle-O colours.

It has also seen service in the Super2 Series in the hands of Kean and Jack Le Brocq, who used it to win the Perth and Townsville rounds of the development category in 2016.

It’s uncertain if Randle will stay in this chassis for upcoming rounds or switch back to his Adelaide car, which is in fact the team’s very first COTF-spec Falcon raced by Richie Stan

away in Super2 at Sydney Motorsport Park last year.

To read all about the racing histories of these cars plus every other Falcon Supercar built over the last 25 years, order your copy of our ‘The Falcon Files’ publication here from our V8 Sleuth Online Store now.

Packed with 240 pages it documents the histories of all of Tickford Racing’s Falcons plus those produced by a range of other teams.