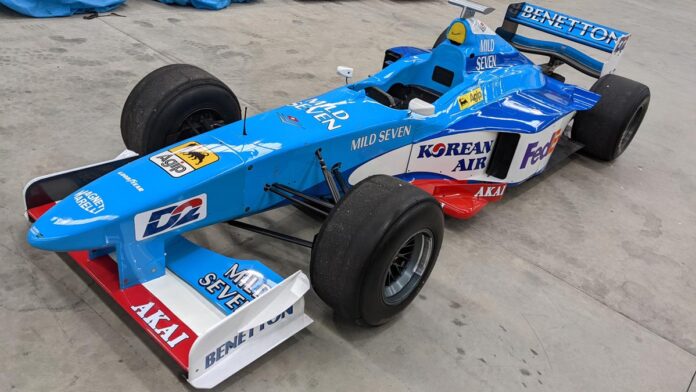 This Benetton B198 raced by the team during the 1998 F1 season now lives at The Bend in South Australia and will feature at The Bend Classic on September 4-5.

Having sat dormant in The Bend’s foyer museum in recent months, it is currently by being prepared at Team BRM’s workshop.

Shahin drove his Dallara F189 to the fastest time in The Classic’s Top 10 Shootout last year and wanted to return with a more modern, paddle-shift era car.

The Benetton is fitted with a 4.0 litre Judd V10 engine rather than its original Playlife-branded Renault.

The Judd is a popular choice for classic F1 car owners looking to undertake track action with their machinery.

Its carbon fibre suspension has meanwhile been replaced by fabricated steel wishbones, also in the name of longevity and cost.

South Australia is already home to a host of historic F1 cars, the majority of which are from the 1985-95 era in which Adelaide hosted the Australian Grand Prix.

Shahin’s Benetton is the second car from the much-missed V10 era to be brought to Adelaide, joining the Kean family’s 2001 Arrows, which now sports a Hart V10 in place of its original Peugeot.