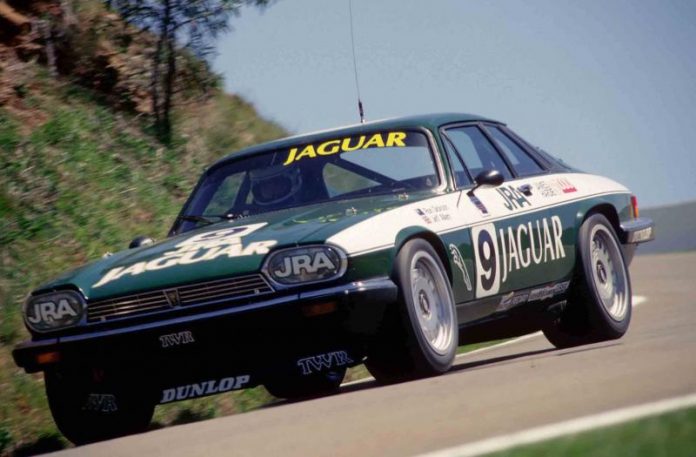 THE forgotten car from the mighty Jaguar assault on the 1985 James Hardie 1000 at Bathurst has come onto the market.

The #9 car driven by Jeff Allam and Ron Dickson that only lasted a handful of laps in the ’85 Mount Panorama classic has recently been listed for sale here via JD Classics in England.

This car – chassis number five – is understood to have been used by the Tom Walkinshaw Racing team during the 1984 European Touring Car Championship and was the newest of the works XJ-S V12 race cars.

Its driver line-up during the ’84 ETCC included then-F1 driver Martin Brundle and it’s also reported to have won in Walkinshaw’s hands in Macau at the end of that season.

It came to Bathurst in ’85 and qualified on the front row of the grid in the hands of Englishman Allam but lasted just a handful of laps when reportedly a damaged headlight sent glass fragments into the engine bay that caused race-ending issues.

However, the sister cars claimed all of the limelight at that year’s race, the #8 car of Tom Walkinshaw claiming pole position before he and Win Percy finished a delayed third behind the #10 winning car of local John Goss and Armin Hahne.

After its Bathurst trip the car was raced at Fuji in Japan in late 1986 (with Walkinshaw and Percy driving) before being taken to New Zealand to compete in the Nissan-Mobil 500 at Wellington and Pukekohe, with the Walkinshaw/Percy driving combination at the helm at the former and Percy and Armin Hahne at the wheel for the latter – they finished second in the car’s final period competition appearance.

The car was put into storage before being restored by TWR in 1989 before forming part of a major Jaguar collection.

It was given a refresh in 2004 and re-entered competition in 2011 in the JD Classics Challenge at the Algarve Historic Festival.

In fact one of its drivers in that event was Brit Alex Buncombe, known to Aussie race fans for driving as part of Nissan’s Supercars endurance program in recent years and also part of the Nissan Bathurst 12 Hour line-up in previous seasons.

The car competed at a range of events and circuit before it was given another sensitive restoration by JD Classics in 2015/16 and was brought up to current FIA race specification with the engine also given a complete overhaul.

A new fuel cell and electronic management system were fitted so the car could participate in the High Speed Demo for Group A touring cars at the 75thGoodwood Members Meeting in March last year with Steve Soper stepping behind the wheel, see below.

Now offered in race-ready condition, the car is to be accompanied by a substantial history file, quite the piece of history given it was the last TWR Jaguar touring car to race in period.