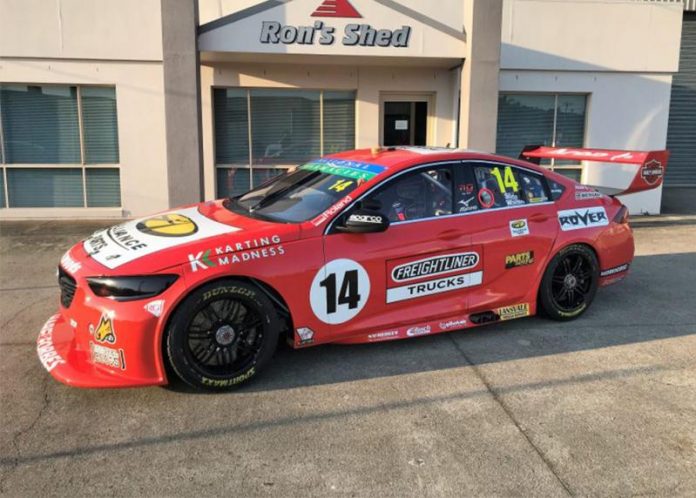 BRAD Jones Racing has revealed the first of its retro-round liveries ahead of this weekend’s Sandown 500, showing off the colours of the Freightliner Racing Commodore that harks back to Bob Jane’s GTS 350 HQ Monaro.

The Albury-based squad took the covers off the #14 car of Tim Slade and Ash Walsh this evening ahead of the reveal of the team’s remaining cars in the coming days.

Following their theme from last year’s Sandown 500, the team has used the retro round as an opportunity to provide insight into the Jones brothers’ early years in motorsport.

The celebration of Jane’s mighty Monaro is fitting for the Supercars team, its co-owners Brad and Kim Jones having had a long association with the four-time Armstrong 500 winner and Supercars Hall of Famer.

“We chose to replicate the Monaro because Kim worked on that car back in the day,” said team owner Brad Jones.

“It was a stellar GM product and it will really resonate with the Holden fans.

“Bob was a close friend of our family, and most people wouldn’t know this, but he was our Godfather. If anything were to happen to our parents back then, he would have been stuck with Kim and I.”

Jane first built the HQ Monaro in 1972 under Improved Production regulations and the car made its Australian Touring Car Championship debut at Surfers Paradise that year with John Harvey at the wheel – Harvey finished second that day to Jane, who was still driving his Chevrolet Camaro.

Following the ’72 season the Improved Production regulations were scrapped, resigning the Monaro to a career in Sports Sedans where Jane proved more than a match for his rivals.

Fast forward through the decades and the connection between Jane and the Jones family continued as the brothers set about building a top-line touring car team.

“As our racing careers grew there were plenty of connections,” says Brad.

“Kim’s first Formula Ford was purchased from Bob, the first production car series we competed in was the Super Series that Bob ran at Calder Park and Adelaide Raceway. Then, there’s the Thunderdome which Bob was responsible for opening in 1987.”

The BJR Commodores will join the rest of the Virgin Australia Supercars Championship field at this weekend’s Sandown 500 retro round from September 14-16.