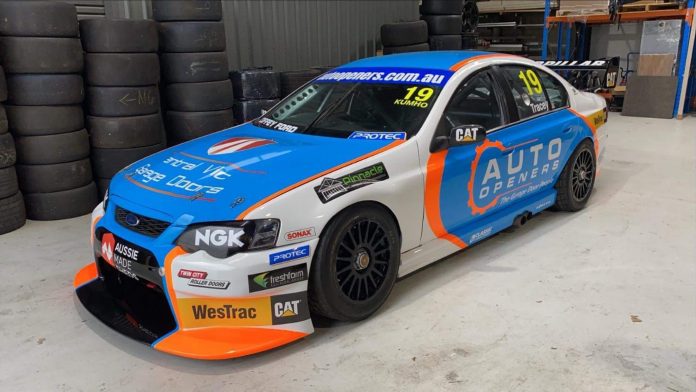 Mark Tracey from Albury is part of the field of Super3 cars in next weekend’s combined Super2/3 round as part of the Supercheap Auto Bathurst 1000 and will be lining up in his ex-Jason Bright Falcon.

The car, built by Britek Motorsport in 2008 and driven to ninth place in the ’08 Bathurst classic by Bright and Adam Macrow, has not been back to Bathurst since that top 10 finish.

It was last seen in action last year at Phillip Island in Super3, however was damaged in a start line accident that has sidelined it ever since.

“The whole car has been repainted at BJR (Brad Jones Racing),” Tracey told v8sleuth.com.au this week.

“The diff got bent in the Phillip Island shunt, so we’ve had that straightened up and the rest of the car has gone back together over time.”

Tracey competed at Bathurst earlier in the year in a BMW in the Combined Sedans support category at the 12 Hour, but Super3 will be a whole new experience for him on the 6.213-kilometre Mountain layout.

“I had a run in February in the BMW, started last on the grid and finished 16th outright and won the class and got to pass a lot of cars, it was lots of fun!” he says.

“I’ve done a few Bathurst Challenges, so when they said Super3 was on, I had to get involved. I’m a bit nervous but I can’t wait to get out there and onto Conrod Straight!”

Tracey’s Falcon spent time stored in Jason Bright’s garage at home after the closure of Britek and it never competed at Bathurst in Super2, making its 2020 venture to the Mountain its first start at the famous track in 12 years.

The car has been returned to its base Britek/Fujitsu colours and livery with a mixture of Tracey’s contemporary sponsors included along with a range of period correct signage.