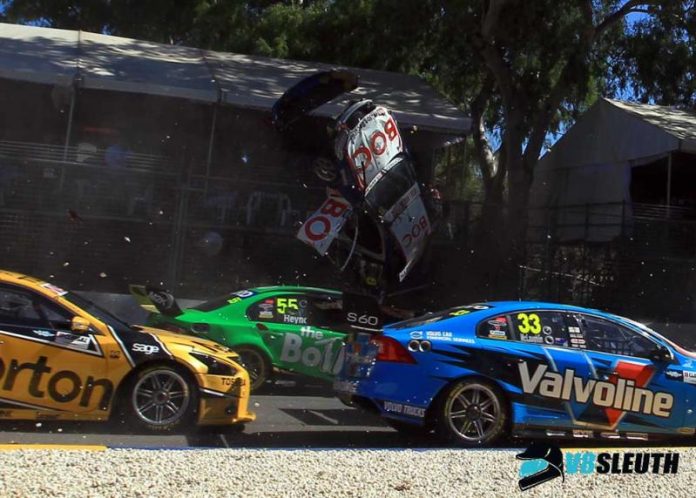 AN important car in the history of Brad Jones Racing has become the latest Supercars chassis to be sold overseas.

The team’s first Car of the Future chassis has joined the growing collection of Holden Supercars owned by Englishman Alex Sidwell, with the VF Commodore joining his PWR Racing VE Commodore, a Tasman Motorsport-built VE, and an ex-PWR, HRT-built VZ Commodore.

The car was raced by Zane Goddard in this year’s Dunlop Super2 Series, with Sidwell having a drive of the car at Winton last week before it is shipped to its new home.

“I’m never going to be able to race there because of my licence, but it’s nice to be able to say I got out there on an Australian circuit,” Sidwell told V8 Sleuth.

Along with being the team’s first Car of the Future-spec chassis, it was also the first car built fully in-house by BJR since it joined the Supercars Championship in 2000.

The car had a brief life in the main game, racing throughout 2013 in the hands of Jason Bright before it was severely damaged in a spectacular crash in the Sunday race at the 2014 Clipsal 500 Adelaide.

The chassis remained dormant for several years before it was repaired and returned to service inSuper2, where it was raced by Jack Smith and Goddard across the last two seasons.

Adding to its special history with BJR, it was the chassis Bright used to claim the inaugural Jason Richards Memorial Trophy at the 2013 ITM Auckland SuperSprint, with Sidwell intending to return the car to its livery from that event.

“The history of the vehicle is important to us,” Sidwell said. “We don’t buy stuff for the sake of buying it, we buy it for a very good reason.

“All the vehicles we have so far have got some sort of history to them, or mean something to me.”