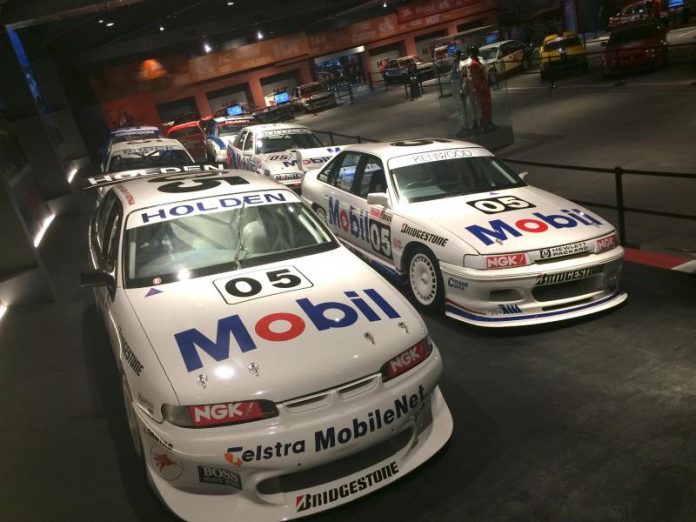 THE majority of cars that formerly were a part of the Peter Brock collection of Peter Champion will now be auctioned off.

Lloyds Classic Car Auctions in Queensland will be handling the auction of the Peter Brock Collection of cars and is calling for registrations of interest online.

The cars had only recently been sold to an unnamed private owner.

V8 Sleuth understands the auction will take place in September. It has been confirmed by Lloyds it will be at Bathurst.

Don’t forget you can read all about Peter Brock’s Bathurst cars in our ‘Cars of the King’ magazine here.

And you can order our new ‘Holden at Bathurst, 1963 to 2017 – The Ultimate Photographic History’ book featuring a photo of every Holden to ever compete in the Bathurst 500/1000 – including all of Brock’s Holden race cars here.

A video emerged on social media this week of a range of the cars from the collection – which most recently lived at Dreamworld on the Gold Coast as part of the ‘Brock’s Garage’ attraction – sitting in the Lloyds Auctions facility in Carrera, Queensland.

The video gives an idea of which cars will be coming up for auction and which cars have been either retained by the private collection’s new owner or indeed have already found new homes.

On show in the video were cars including the 1982/1983 Bathurst-winning HDT Brock VH Commodore (still in ’82 livery but ’83 body kit hybrid form) and the 1984 ‘Big Banger’ HDT Commodore VK Group C.

Also appearing in the video was the 2002 Team Brock Commodore VX Bathurst V8 Supercar, Brock’s 1995 Mobil 1 Trial Commodore VR, his Targa Tasmania Monaros and Holden Ute, a Mobil-liveried RS500 Sierra Cosworth, the XU-1 Torana Brock drove in Targa Tasmania and in his last circuit start at Symmons Plains in 2004, and the Austin A30 replica built by James Brock in 1997.

“Our recent sale of the Ford GTHO Phase 3 Falcon selling for over $1 million shows that the interest and passion for Australian-made cars is still there and Lloyds Classic Car Auctions is excited to be part of this great movement,” Head Auctioneer Bill Freeman said on their website.

“We want to take these extremely rare cars on tour and display them across the country in coming weeks in what could be the last time ever to see them all together! This auction has a purpose and not only honours Brocky but will mark a truly special time in Aussie motoring history for enthusiasts in years to come.”

A range of cars that were part of the collection under Champion’s ownership did not appear in the video with the future of two of them being reported on this week.

Australian Muscle Car Magazine reported in its latest issue that two cars from the collection are destined to be raced in Heritage Touring Cars – the 1983 #05 Bathurst VH Commodore by George Nakas and the ’86 ex-Brock Mobil HDT Commodore VK with Chad Parrish at the wheel.

Not appearing in the video was the 1987 #05 Mobil HDT Racing Commodore VL, 1969 Monaro GTS 350, Austin 7 ‘paddock basher’ and four-door HDT Marlboro Torana A9X, however another photo to emerge from social media suggests the #05 VL and Austin 7 arepart of the group of cars at Lloyds.

The Daytona Coupe that Brock was killed in back in 2006 in Perth has been retained by Peter Champion and was not sold as part of the collection while Champion also has retained his HDT road cars and the HDT Special Vehicles business.