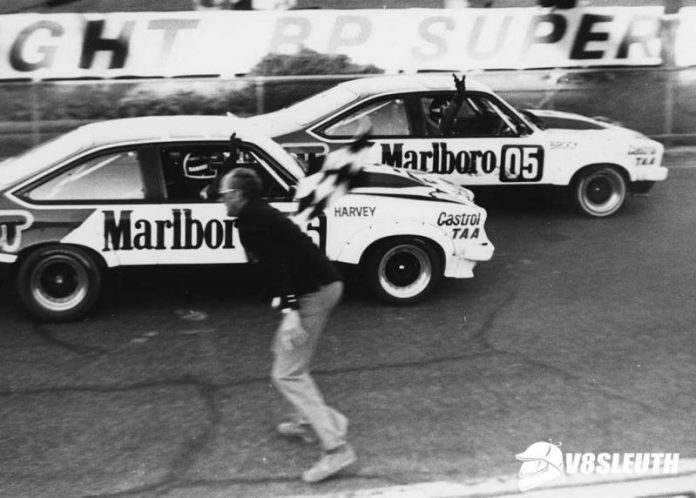 PETER Brock’s grip on Mount Panorama is at the core of his legend, but his record at his ‘home’ enduro at Sandown was just as formidable.

The King of the Mountain was near-unstoppable at the Melbourne circuit throughout the 1970s and early 1980s, Brock claiming nine Sandown enduro wins in a 12-year span, including seven in a row between 1975 and 1981.

His 1979 victory, just three weeks prior to his dominant six-lap victory in the Hardie-Ferodo 1000, served as a warning of what his rivals could expect when they headed to the Mountain.

The Hang Ten 400 was Brock’s first touring car race since falling short in a final round showdown for the Australian Touring Car Championship with Bob Morris.

But he was far from idle in the five weeks between the end of the sprints and the start of the long distance races. The Repco Round Australia Trial accounted for three of them, Brock adding to his legend with an unexpected triumph and leading the factory-run Commodores home for a 1-2-3 result.

Back in his beloved #05 Torana, Brock blitzed his chief Holden rivals Bob Morris and Allan Grice to take pole, but it was the newly-crowned touring car champion who won the start to take an early lead. That is, until Brock ranged up alongside on the back straight and passed Morris around the outside into the Esses.

The move was the first salvo in a busy dice for the lead with Brock’s MHDT teammate John Harvey also buying into the scrap. Brock, however, soon elected to hang back and let his rivals overwork their cars. It would prove a savvy move.

Fast work by the MHDT crew would turn Brock’s deficit into a handy lead. In contrast, Grice’s day ended early with engine problems, while Morris’ hopes faded with a slow pit stop and a one-minute penalty for speeding in the pit lane, before he too succumbed to engine woes just a few laps from home.

That left Brock and Harvey alone to take the chequered flag in first and second – albeit a lap apart – with the two Marlboro-backed cars cruising across the line side-by-side in team formation.

For the MHDT it was a repeat of their domination of the same race 12 months earlier, foreshadowing the speed and reliability that would carry Brock to his most dominant Bathurst 1000 victory three weeks later aboard the same car.