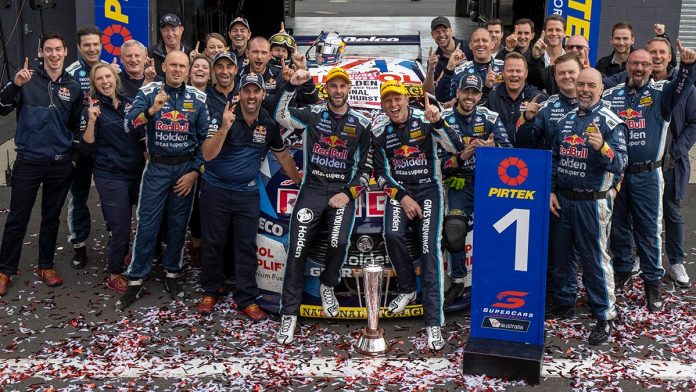 ANY one of the three announcements made by Triple Eight Race Engineering this morning would have been a bombshell in its own right.

Jamie Whincup, the greatest driver of Supercars’ modern era and arguably its GOAT – Greatest Of All Time – is retiring to take over running the team.

Roland Dane, the spearhead of Triple Eight’s rise to dominance in motorsport initially in the United Kingdom and then here in Australia over the past three decades, is taking a big step back.

Tony Quinn, the colourful and astute businessman behind the rise of VIP Petfoods and resurrection of Darrell Lea and renowned motorsport enthusiast, is now Triple Eight’s majority owner.

END OF AN ERA: Jamie Whincup to retire from full-time Supercars racing

These are the burning questions raised by one of the most seismic and unexpected announcements in recent memory.

That order reflects the size of each’s stake: Quinn holds the biggest slice of the pie with a 40% share, Jess Dane has 30%, Whincup 19%, while RD retains 11%.

Quinn’s share was purchased from now-former Triple Eight co-owners Tim Miles and Paul Dumbrell – but both will remain involved with the team.

HOW DID THE DEAL COME ABOUT?
According to the team, it all happened reasonably quickly.

“The conversations and negotiations between Tony and Triple Eight happened relatively quickly and very smoothly, as they do when the stakeholders are passionate and motivated to continue winning,” the team’s announcement said.

“While the larger plan has always been for Jamie to take over from Roland, Tony’s investment has more been a case of the right interests aligning at the right time.”

From Quinn’s perspective, he sees an opportunity with a new era of Supercars on the horizon.

DOES ROLAND DANE RETAIN A ROLE WITH TRIPLE EIGHT?
Yes. Dane retains his roles as Managing Director and Team Principal for the remainder of 2021.

After that, he takes on a part-time role as an advisor to the team and the Chairman of Triple Eight Race Engineering’s board of directors.

It will be a two-year transition: Whincup will spend this year dovetailing racing with learning increasingly more about the roles he will assume in 2022, while next year the pair will “maintain a close working relationship through Dane’s part-time capacity,” per the team’s statement.

WHO WILL RUN TRIPLE EIGHT AFTER DANE’S EXIT: QUINN OR WHINCUP?
That will be Whincup.

Quinn has the biggest single stake in the team and will supply his wealth of experience to its board of directors, but he will not have a full-time role in running the team.

Interestingly, the reason for Whincup not being the major shareholder was addressed in Triple Eight’s statement: “The shareholdings have been structured to give the best possible opportunity for a smooth transition and to further future-proof the business.”

CAN WHINCUP BE A TITLE THREAT WITH HIS ADDED RESPONSIBILITIES?
If the last few years have demonstrated anything, it’s that you can never count Jamie Whincup out.

He no longer wields the dominating raw pace he held at his peak, but his 2017 season illustrated that Whincup possessed the drive, the hunger – heck, the guile and ruthlessness – to graft his way to a title against a younger, faster opponent.

Last year he joined the exclusive club of drivers to win championship races across three decades.

He showed the field a clean pair of heels in the season-opener in Adelaide by taking pole position and dominating the race; they were the first of six poles and four wins he’d earn, further extending his lead at the top of both career metrics.

While his unforced error in the early stages at Bathurst dropped him to fourth in the standings, Whincup was eventual champion Scott McLaughlin’s only consistent rival across the 2020 season.

He may have a little more on his plate this year, but Whincup has a proven record in biting off more than most people can chew and still prospering.

WILL TRIPLE EIGHT CONTINUE AS THE BENCHMARK WITH WHINCUP AS BOSS?
Only time will tell.

As visible as Roland Dane has been since arriving in Supercars in 2003, it is the unseen elements of his influence in Triple Eight’s fortunes – the wheeling and dealing in both the commercial and political aspects of Supercars and the wider business community as a whole – that have maintained its position as the benchmark of the championship for so long.

Whincup is no stranger to the world of business, from his first job stocktaking at a Mitre 10 in Melbourne to the last few years owning and running LOCA, a car wash café on the Gold Coast that employs around 40 people.

While running one of the biggest teams in Australian motorsport is a different proposition, Whincup has stated on many occasions over the past five years that he intended on moving into team ownership once his driving career ended.

His acquisition of a 15% stake in the team in 2018 followed by a move onto the Supercars Commission a year later.

There have been a lot of drivers across many different forms of motorsport that have managed the transition from cockpit to boardroom well and thrived – Niki Lauda and Bobby Rahal come to mind – but many more that haven’t.

Having the ear of successful and astute businesspeople like Dane, Quinn and his long-time friend Dumbrell certainly isn’t going to hurt.

Whincup the driver is already a giant in the record books of Supercars; a successful transition to team ownership and management would elevate him to be one of the greatest identities in its history.

WHO TAKES OVER CAR #88?
Possibly the biggest question of all: how do you replace the GOAT?

The team admits it doesn’t yet know.

“Triple Eight will assess the driver market and our options over the coming months. We do not have a timeline in place for the decision,” its statement said.

“We have two young and talented Super2 drivers this year in Angelo Mouzouris and Broc Feeney, but there are other young drivers out there and we’re looking at all options for 2022.”

Do you opt for youth with a view to the next dynasty?

Triple Eight has only taken on a new full-time driver once in the past 15 years – it had an opportunity to recruit Shane van Gisbergen and Roland Dane struck immediately.

Unfortunately for the team, the suitor most likely 12 months ago – Anton De Pasquale – is now signed with Dick Johnson Racing.

There is no shortage of others who’d be hopeful of getting the call. Will Brown and Brodie Kostecki’s debut full-time seasons now take on the dimension of a job interview – assuming they aren’t tied to Erebus beyond 2021.

Triple Eight has Feeney and Mouzouris waiting in the wings in Super2 seats, but will either be ready to step into a championship-winning seat?

Does the team opt for an experienced hand for a season or two in order to be well-placed to pick up its star of the future? Imagine Garth Tander in the #88 next year…

Happily for the team, it only has to worry about filling one vacancy: van Gisbergen is under contract until the end of 2022.

THE CO-DRIVER DILEMMA: WHINCUP, LOWNDES OR TANDER?
According to the team statement, Whincup “will evaluate co-driving in 2022 with Red Bull Ampol Racing.”

If he chooses to do so, it leaves Triple Eight with an embarrassment of riches on the co-driver front.

But it also leaves a dilemma: who continues in the other co-driver role, Lowndes or Tander?

Both are equally as removed from full-time competition, and from the outside both appear more than capable of still doing the job.

But with three drivers and two roles, Bathurst in October could be the last time we see at least one of them in Triple Eight colours.