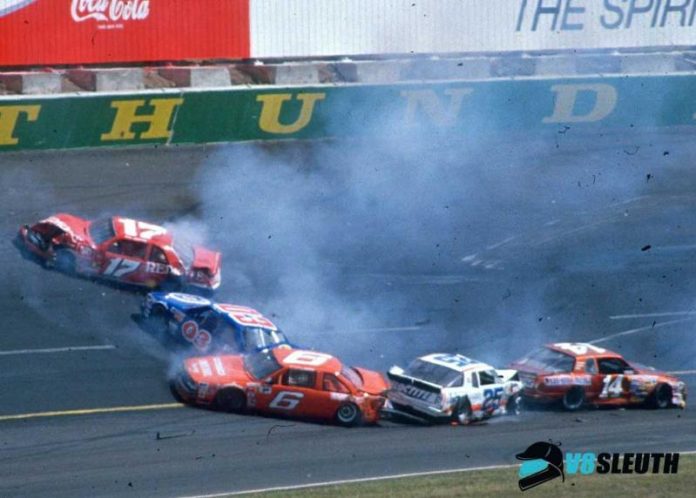 V8 Sleuth hosts a selection of memorable races from Melbourne’s action tracks, including the very firstNASCAR race outside of North America!

CALDER Park Raceway in Melbourne was at the centre of Australian motorsport in the 1980s and 1990s with its road circuit, super speedway oval and drag racing strip all playing host to top-level motorsport.

On the latest release in the Seven Sport Magic Moments of Motorsport Series, V8 Sleuth’s Aaron Noonan hosts a great action-packed release that celebrates the rich contribution of this venue to Australian motorsport history with some memorable events extracted from the 7 Sport archives.

Buy it here now from the V8 Sleuth online store.

First up is the Calder Park round of the 1986 Australian Touring Car Championship with Nissan Skyline pilots Glenn Seton and George Fury squaring off against Volvo ace John Bowe.

Then there’s the opening round of the 1987 Australian Touring Car Championship from Calder which featured the world racing debut of the BMW M3 and resulted in a history-making first ATCC race win for Nissan pilot Glenn Seton.

Fans of the five-litre Commodore and Falcon V8 championship era will also be pleased to see the 1996 ATCC round from Calder that saw Russell Ingall take his very first round win for Larry Perkins and Craig Lowndes also debut the Holden Racing Team’s much-vaunted high-tech ‘Supercar’ Commodore.

And as a special bonus, the very first NASCAR race held outside the United States on the high banks of the Calder Park Thunderdome in early 1988 is also included on this release.

This was a history-making race with a range of top-name American visitors taking on the likes of local stars Dick Johnson and Allan Grice as Australia was first exposed to ‘stock car’ racing.