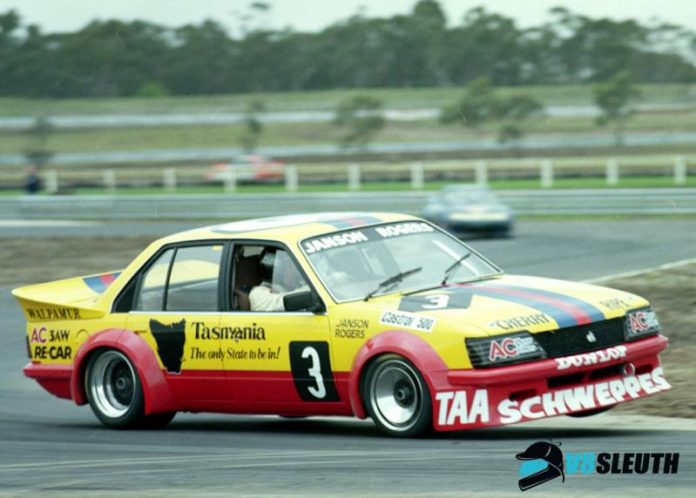 THIS year’s Wilson Security Sandown 500 has a retro theme and a range of interesting and varied race cars from the 1960s, 70s and 80s are being assembled by the V8 Sleuth team to be on display at the Supercars event.

Much has been discussed of the Peter Janson-look-a-like livery mooted by Erebus Motorsport and sponsor Penrite, though even if Betty Klemenko and her team don’t go down that path, Janson cars will be represented at Sandown.

It will join approximately 25 cars on display over the course of the three-day event in a ‘Retro Revival Car Display’ in a dedicated room at the base of the grandstand, open to the public.

Janson was (and still is!) a character of Australian motorsport with a fantastic record in the annual October classic at Bathurst.

After campaigning Toranas during the 1970s, he swapped to Commodores for the 1980s until the end of the Group C regulations in 1984.

The familiar yellow Cadbury-Schweppes cars were co-driven by the likes of Larry Perkins and David ‘Skippy’ Parsons, though by the time saying goodbye to the unique Aussie ‘Group C’ rules came around, both were driving for Peter Brock’s Holden Dealer Team.

While many of the top Commodore teams built up brand new VK model racers for the final few events of 1984, Janson’s team including mechanics Graham Hodgson and Peter Marquis went the other way and built up a brand new VH shell – though still using many of the mechanicals from the previous car – for the endurance races.

Garry Rogers joined Janson in the new #3 Commodore for the Castrol 500 at Sandown on the newly lengthened 3.9-kilometre ‘infield’ layout.

They qualified 12th for the race, which had been extended to 500 kilometres and could no longer, as in previous years, be driven solo.

Rogers started the race, however the Holden had its transmission fail just after Janson had climbed aboard with 46 of 129 laps completed.

At Bathurst the duo qualified 16th but again failed to finish due to fuel system dramas that crippled them and took them out with 109 of 163 laps completed.

And that was that in terms of the car’s Group C touring car racing life – short and brief!

It spent time in Sports Sedan racing and went through a variety of owners’ hands before Seferis acquired it around five or six years ago.

“I love the character of the car. It’s just a nice, friendly car to drive,” says Seferis of the ex-Janson Commodore.

“I’ve been racing for 20 years and I’ve had the most fun of all in this car. Neill Burns has been a great help and I’ve had a ball in it.”

A range of other cars will also be part of the ‘Retro Revival Car Display’ at Sandown, with further details on attending cars to be released here soon.

Watch the Janson/Rogers Commodore in action in the 1984 Castrol 500 here: