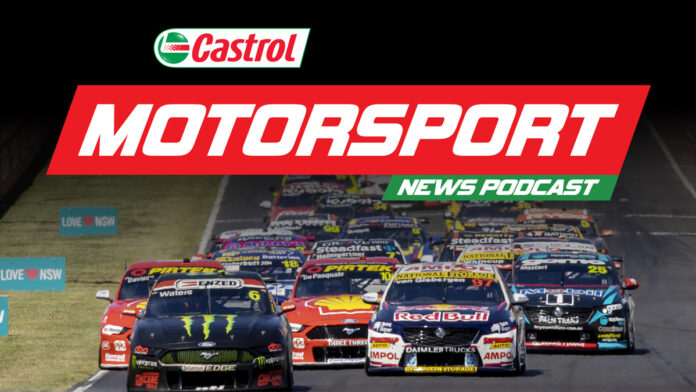 FANS of Australian and world motorsport have a new podcast to keep them abreast of the latest news for the rest of 2021 and the 2022 racing season – the Castrol Motorsport News Podcast.

Produced by the same team behind the V8 Sleuth Podcast Powered by Repco, the new podcast kicks off today (Thursday October 28) and is hosted by award-winning motorsport journalist Andrew van Leeuwen.

The first episode of the podcast takes a deep dive into the news of the sale of Supercars, the Supercars driver silly season, the US F1 Grand Prix and state of the IndyCar Series in America.

World-leader Castrol has signed on as presenting partner of the new regular podcast as part of its commitment to local and international motorsport.

Motorsport fans can listen to the podcast here and via Apple and Spotify.

Western Australian van Leeuwen cut his teeth working on the print version of Motorsport News magazine and served as editor of its eNews digital edition.

He will host the new podcast, which will focus on the latest news, notes and quotes from both four wheel and two-wheel motorsport. It will be published weekly and, when the news is plentiful, more than once a week.

Today’s announcement is the first part of the re-birth of Motorsport News, which was acquired by V8 Sleuth parent company AN1 Media in September.

“Podcasting is a space we love working in and the Castrol Motorsport News Podcast is the next step in the growth of this arm of our business,” AN1 Media MD Aaron Noonan said today.

“I’m really appreciative that Castrol share our vision and a commitment to providing something to the industry and its fans and followers that is not currently being offered in our market.

“This is the first of a few developments for the re-birth of Motorsport News in Australia. We’ve been thrilled by the response from the industry and supporters since we announced the acquisition in September.

“Andrew is much more than a fine print and online journalist; he has a great laid back presenting style in front of the microphone and can spin a yarn with the best of them. He has the trust and respect of the motorsport industry, which is massively important.

“Many motorsport fans have heard his work on other podcasts before – we’re thrilled to have him on board to spearhead the Castrol Motorsport News Podcast.”

“Motorsport will always be a core part of Castrol’s DNA, so partnering with V8 Sleuth to create the Castrol Motorsport News Podcast is just a perfect fit,” he says.

“The final months of 2021 will be some of the busiest in Australian motorsport history and Castrol is excited that the Castrol Motorsport News Podcast will play an important role in keeping fans in-the-loop with the news as it happens.

“Castrol products are pushed to the limit by motorsport teams at all levels – from the Alpine F1 Team all the way to the Australian Kart Championship – and the Castrol Motorsport News Podcast is the easiest way to stay across them all.”

New host van Leeuwen is excited by the chance to again fly the Motorsport News banner.

“I love delving into the latest news of the day and hosting the Castrol Motorsport News Podcast is right up my alley!” says van Leeuwen.

“I have a great history with MN and the fact it’s being brought back in a new way is exciting.

“We’ll be delving into our contact books to bring on some interesting news-making guests as well as debate and analyse the news and the issues that come out of what’s going on in the world of motorsport.”