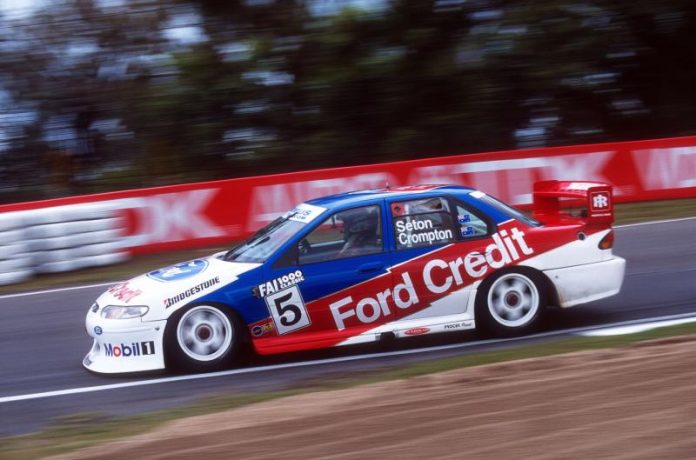 Seton Falcon and Skaife HRT Commodore head back to the track …

Sydney driver Andy Cantrell has entered his ex-Glenn Seton EL Ford Falcon for the third round of the Kumho series – for ex-V8 Supercars – to be held at the Coates Hire Ipswich SuperSprint event on July22-24.

An 18-strong grid has nominated for competition at the 3.1km circuit near Ipswich – but it’s the addition of the two cars once steered by former ATCC/Supercars champions that are likely to grab the attention of plenty of fans watching trackside and on TV.

Cantrell’s EL Falcon was the last car built by Glenn Seton Racing and was driven by Seton in 1998 with No. 1 on the door. Seton was joined by Neil Crompton in the endurance races that year, with Crompton also racing the car in the early stages of the 1999 season under the Ford Tickford Racing banner.

The Falcon was driven to the inaugural Konica V8 Lites title in 2000 by Dean Canto and continued to be raced by a range of other drivers in the series now known as the Dunlop Series.

Sydney’s Cantrell purchased the car in 2004 and last raced in his hands in February this year – at Mount Panorama in the Bathurst 12 Hour combined sedans races.

Millet’s ex-HRT Commodore was built in 2006 and was used by Mark Skaife to equal Peter Brock’s ATCC/Supercars record for most round victories when he won at Pukekohe that year.

The car was sold for the 2007 season and raced in the Development Series before being sold to former V8 Utes racer Millett in 2011.

Millett raced the car at Bathurst in both 2015 and this year and will make his Kumho Series debut in the car next week.