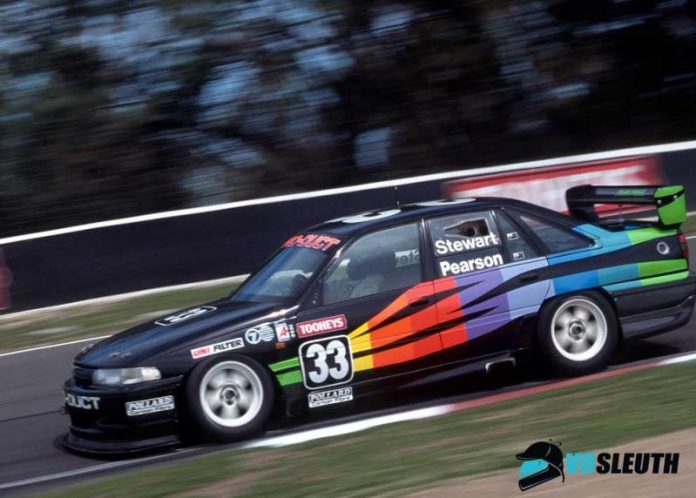 Sydney driver Jamie McDonald has entered his ex-Pro-Duct Motorsport VP Holden Commodore in the Vectra Corporation-supported Heritage Class for what will be the car’s first race in more than 20 years.

The Heritage class, for earlier model cars from the early era of the ‘Supercars’ regulations, will be a feature of the October 27-29 weekend amidst the broader fight for the Kumho Series’ overall and Kumho Cup class battles in the V8 Sleuth-supported series.

McDonald’s entry was originally built in 1993 by Larry Perkins for Sydney privateer Bob Pearson and was famous for sporting an iconic livery of rainbow colours on an aggressive black base.

“Rod Smith from Ballarat bought the car in 1996 and it did some hill climb events with Milton Seferis in 1997 and then sat idle until I bought it in 2016,” says McDonald.

The car was demonstrated at Muscle Car Masters last year however will return to racing for the first time this month within the Kumho Series.

The Heritage Class is expected to feature several classic Touring Cars at the annual Sydney Motorsport Park event, including Brad Neill’s ex-Parsons VS Commodore that he has raced all season.

This year’s Kumho Series has been a competitive affair however the current championship leader holds a strong margin heading into the final round.

The Bathurst driver, however, will need to be at the top of his powers to hold on to second in the championship with Anderson and his three nearest rivals covered by just 47 points.

Tyler Greenbury, Jon McCorkindale and Jordan Boys will each be chasing Anderson for second in the tile race across the three races in Sydney.