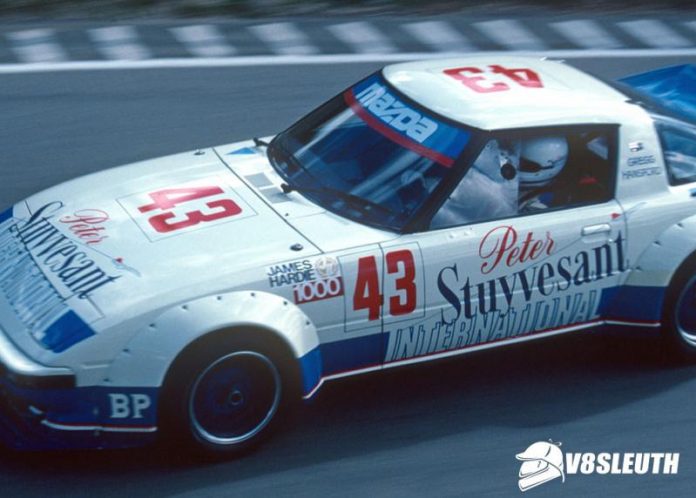 LONG suspected and argued over, the latest issue of Australian Muscle Car Magazine has confirmed the truth of a long-suspected gearbox tweak hidden in Allan Moffat’s iconic Mazda RX-7s.

The Peter Stuyvesant-backed cars are the focus of AMC issue 110 with Mick Webb, the mechanical mastermind behind the cars, confirming they occasionally ran a six-speed gearbox – despite the Mazda only having a five-speed homologated under the Group C rules of the day.

“The six-speed came about after the first year at Bathurst,” Webb told AMC.

“We had a super-reliable car and we could run it flat for the whole race; it just lacked that little bit up the hill.”

“I said to Allan, ‘well, the only way to alleviate that is to put another gear in it.'”

The details of the special gearbox and the RX-7’s competition history in Moffat’s hands are laid out in the main feature of AMC 110, outlining the struggle he went in just getting the Mazda homologated for touring car racing in Australia, then the constant battles for upgrades including peripheral ports, fuel injection and the controversial 13B rotary engine.

The six-speed gearbox was a part that Webb snuck past the scrutineers, although he maintains it was only used at Sandown and Bathurst.

“It was fantastic really, and it worked perfectly,” Webb said.

Australian Muscle Car issue 110 also revisits the head-to-head showdown for the 1979 Australian Touring Car Championship between Peter Brock and the Holden Dealer Team versus eventual winners Bob Morris and Ron Hodgson Racing – and the two cars Morris used to do it! – while Geoff Brabham is the feature of the Muscle Man profile.