Home News CRASHED MUSTANG BACK FROM THE DEAD 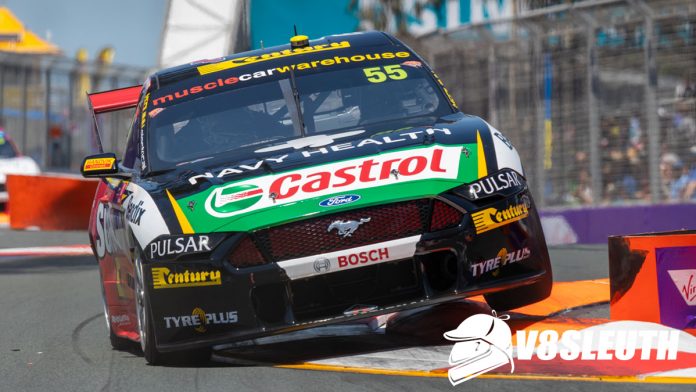 THE Ford Mustang spectacularly crashed by Chaz Mostert at last year’s Vodafone Gold Coast 600 has been saved from the scrapheap.

Chassis FPR 1519 was initially thought to be a write-off after Mostert’s hard crash during the Saturday Top 10 Shootout on the Surfers Paradise streets, the damage sustained forced him into a different chassis for the remainder of 2019.

However, despite Tickford Racing initially declaring the car a write-off, a closer inspection by the team over the off-season revealed that it was not damaged beyond repair.

In fact, it wasn’t even the biggest chassis repair the team has done.

“It pretty much sat in the corner for a little bit while we continued racing in the back end of last year, and then we pulled it apart,” Tickford Racing team principal Tim Edwards told supercars.com.

“Once we stripped all the damaged parts and sheetmetal back, the chassis was actually fine. Essentially, the sheetmetal was all replaced and she was as good as new.

“The car Chris Pither crashed at Turn 8 at Adelaide in 2016, that was a bigger repair and was in the middle of a race season, so that put more strain on the team at the time.

“The guys just pulled this one apart, the race crew came back from holidays over Christmas and she was sitting freshly-painted in the workshop.”

The rebuild means the chassis will once again serve as the team’s #55 Supercheap Auto-backed entry, albeit for new driver Jack Le Brocq in place of the departing Mostert.

Prior to its return to action in Le Brocq’s hands, FPR 1519 had exclusively been Mostert’s car for its entire racing life.

Built new for 2016 to replace the chassis destroyed in his horror qualifying crash at the 2015 Supercheap Auto Bathurst 1000, Mostert celebrated its debut with a pole position at Adelaide.