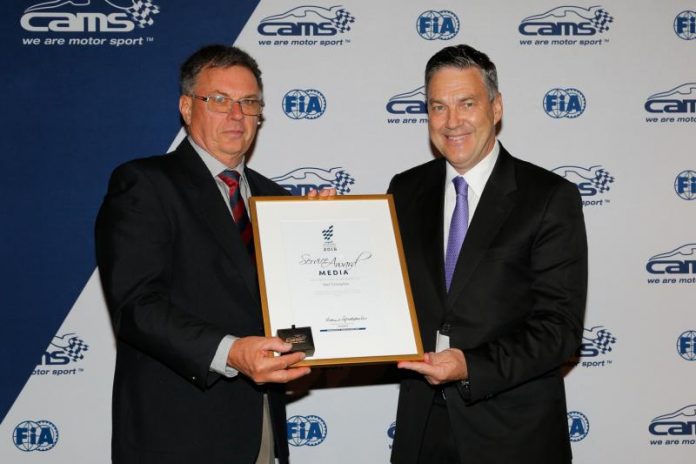 The voice of Supercars recognised alongside 2016 national champions …

His media career has included stints at ABC, Seven,Network 10, Triple M and many other outlets, becoming the familiar face and voice of motorsport on television to a generation of fans across the country.

Crompton has also recently penned the foreword to the new V8 Sleuth book featuring the racing histories of every Holden Racing Team race car, spanning the creation of the time in 1989 to 2016 – it can be pre-ordered here online now.

Crompton was just one of numerous contributors to Australian motorsport beyond the current crop of champions that were recognised at the event.

CAMS Life Memberships were the first to be awarded on the night, with Colin Trinder, Alan Vaughan, Denise Strawbridge and John Bowe all receiving life membership honours for their contributions to motor sport spanning multiple decades.

As well as Webber’s recognition on the international stage, Australia’s own Dr Brent May was recognised by the FIA as the Best Doctor of the Season.

Garrett ‘Garry’ Coleman OAM accepted a Presidential Citation for being a National Coordinator and Senior Chaplain at motor sport events.

Locally, Dr Michael Henderson received the Award of Merit, while Robert Thiry was awarded the 2015 Australian Official of the Year.

Photographer Glenis Lindley received a Media Service Awardwhile Rebecca Thompson took out the Photograph of the Year, with John Morris claiming Photographer of the Year honours and Paul Gover awarded Journalist of the Year.