Home News DESTROYED DJR FALCON BACK FROM THE DEAD! 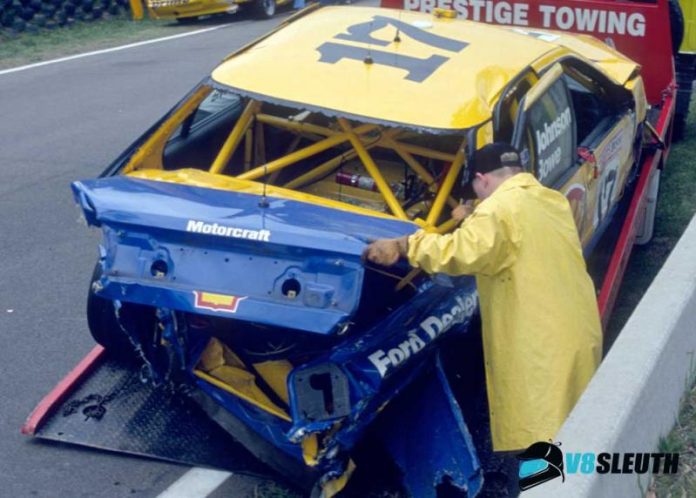 Crashed in the 1993 Bathurst 1000, this former Shell Ford has just changed hands …

THE Shell Falcon EB famously smashed in the 1993 Bathurst 1000 by Dick Johnson after he was collected by privateer Bill O’Brien has changed hands – with a return to the track in the mind of the owner.

Long-time Historic motorsport identity Terry Lawlor has acquired the car from the Bowden family collection with the goal of returning it to the track.

The car, raced by Johnson throughout the 1993 season, is chassis EB3 and last actively competed at Bathurst that year before the accident damage sidelined it fromracing.

To see a photo of this Ford from its 1993 Bathurst year- plus every other Ford to race at Bathurst from 1963 to 2018, order our new ‘Ford at Bathurst’ limited edition collector’s book here.

To read more about the history of this car and indeed all Falcon V8 Supercars from 1992 to 2017, grab a copy of our ‘The Falcon Files’ limited edition magazine here that outlines the histories of more than 150 cars!

The Falcon was parked to one side at Dick Johnson Racing before its body shell was repaired by students at the Campbelltown TAFE in Western Sydney as part of their course in 2000.

It has since been displayed as a replica of the 1994 Bathurst-winning Falcon that was written-off in an accident at Phillip Island in 1996.

Lawlor has added the Falcon to another ex-DJR car within his collection.

He also presently owns and races the DJR6 Shell Sierra RS500 driven at Bathurst in 1990 by Johnson and John Bowe – it’s a regular competitor in Heritage Touring Cars for Group A & C machines.

Lawlor’s acquisition of this car is the latest in a range of 1990s V8 Supercars/five-litre touring cars changing hands.