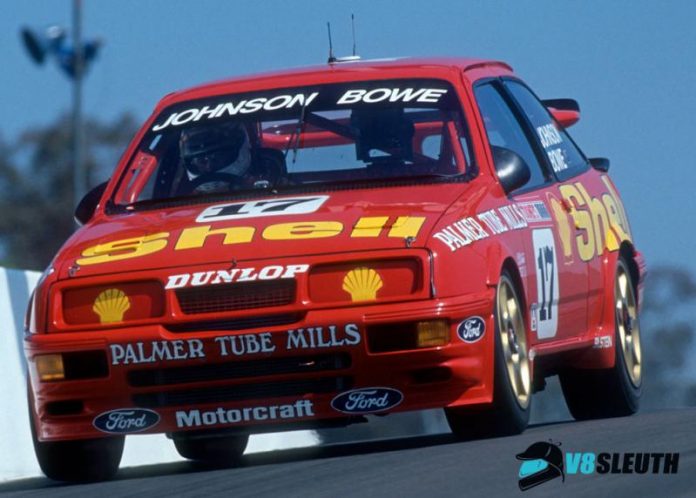 The Greens-Tuf Mustang raced by Johnson during the 1985 Australian Touring Car Championship has been acquiredby Brad Host, who recently took delivery of the V8 muscle car that began its life with Zakspeed in Germany in the early 1980s.

Johnson drove the car to finish second in the 1985 ATCC behind the dominant JPS BMW 635 of Jim Richards and it became the team’s #18 car at Bathurst that year, driven by Larry Perkins in the Top 10 Shootout before it was withdrawn prior to the race.

Long-time Heritage Touring Cars driver Terry Lawlor has sold the Mustang, however he’s replaced it with another ex-DJR car, the last Shell Sierra RS500 Cosworth built and raced by the team that has been most recently owned and driven by Chris Stillwell in HTC Historic competition.

The last of six Sierras built by Johnson’s Queensland-based team, Lawlor’s new car competed at Bathurst in the hands of Johnson and co-driver John Bowe in 1990 and 1991.

Johnson drove it in the 1992 Australian Touring Car Championship before it also took part in the infamous wet 1992 Bathurst 1000 raced by Terry Shiel and Greg Crick and driven in practice by a very young Cameron McConville.

The car was sold to Western Australia when Australian touring car racing reverted to a Holden versus Ford V8 format for the 1993 season.

Here’s Dick driving the Sierra in the 1991 Tooheys Top 10 Shootout at Bathurst: