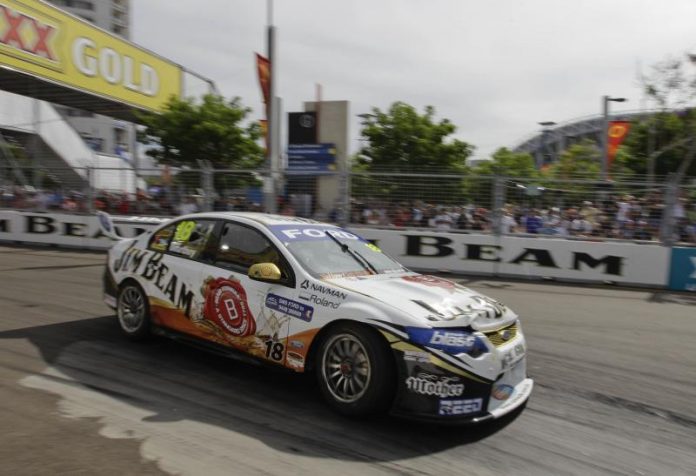 DJR has engaged the V8 Sleuth himself Aaron Noonan to act on its behalf for the sale of the car.

James Courtney took the Triple Eight-built FG Falcon (chassis 888A-018) to the 2010 championship in a dramatic final round on the streets of Sydney Olympic Park at the Sydney Telstra 500.

It was raced by Courtney throughout the 2009 and 2010 championships as the #18 Jim Beam entry, culminating in his first – and DJR’s seventh – championship crown.

Appropriately, the car raced throughout its three-and-a-half year racing career under the competition number 18 in addition to also being chassis 18.

The car was also raced by James Moffat – son of four-time Bathurst winner Allan – in his impressive debut season in the 2011 V8 Supercars Championship and last used at Queensland Raceway last season by the now-Nissan driver.

The chassis made three Bathurst 1000 starts, including a fifth place in Courtney’s 2010 championship-winning season with Luff co-driving.

It is one of seven racing FG Falcon chassis built by Triple Eight Race Engineering; five are presently racing in the Dunlop Series while the other is a bare shell that has lay idle since 2011.

“As much as we’d love to retain each and every car that we’ve raced, the simple fact is that we can’t and no team is in a position to do so,” said team boss Dick Johnson.

“The change to Car of the Future this year in the V8 Supercars Championship means that we can’t race this particular car anyway.

“It has fantastic history and was part of what I reckon was one of the most gripping championship finales we’ve ever seen in this country.

“The drama that surrounded that last event in Sydney was the sort of stuff you couldn’t even script.

“We’d like to find the car a new home. It will always retain a special place within the walls of DJR for its achievements and the work put into it by everyone in our workshop.”

A wide range of supporting documentation will be included with the car, including setup sheets and data sheets from its 2010 championship-winning season, original sales invoices and associated records.

Interested parties are asked to send expressions of interest via email to: aaron@v8sleuth.com.au