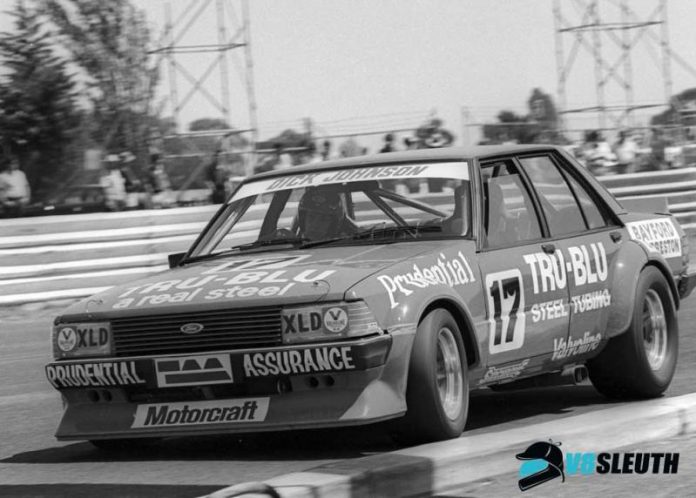 DICK Johnson’s Tru-Blu Ford Falcon XD stands out as one of the great Australian touring cars of the emotion-charged Group C era of racing.

His 1982 Australian Touring Car Championship challenger was the same car that had narrowly helped the Queensland folk hero to his first national title a year earlier.

In fact, it was the car that was built with funds raised by sympathetic television viewers that were matched by Edsel Ford after Johnson had smashed into a stray rock at Bathurst in 1980.

In 1982, Johnson would again find his main challenger to be Peter Brock’s Holden Dealer Team Commodore and the two embarked on what would essential be a two-man tussle for the championship.

But while the duo fought hard on the track, political wranglings off-track helped derail a great contest.

Brock was busy fighting the Confederation of Australian Motor Sport over the legality of his Commodore and in the end he was removed from the results of the final five rounds of eight held that year. But it didn’t stop the on-track activity being as close as ever.

Despite the overshadowing off-track stories, Johnson was in brilliant form on it in the Tru-Blu XD. He convincingly beat Brock in both races on the latter’s sacred home soil at Sandown in the first round and would be awarded round two at Calder after finishing second on the road when Brock was disqualified post-race.

Another second place in round three at Symmons Plains left Johnson strongly placed, but his luck began to run dry, ironically enough, in the wet at Oran Park.

A wrong choice of tyres left him floundering and eventually retired in the pits, while he would finish second on home soil at Lakeside to the recently debuted Mazda RX7 of former Ford hero Allan Moffat.

A blown module in the electronic ignition sidelined Johnson at Wanneroo but he bounced back to win at Adelaide International Raceway and was involved in contact with Moffat in the final round at Surfers Paradise that left the Falcon a non-finisher.

But it didn’t matter, he was the 1982 Australian Touring Car Champion, which was only ratified two months after the last round when Brock and CAMS settled out of court after appeals and accusations had flown backwards and forwards.

Johnson finished the season with three round wins, three pole positions and five fastest laps from the nine races that made up the championship.

His team built up a new XE for the 1982 endurance events and the XD was sold to Alf Grant, who competed in the car for another few seasons (including two top 10 finishes at Bathurst in 1983 and 1984) before it was sold back to Johnson in 1991.

Now back in its original colours and part of David Bowden’s car collection, the Tru-Blu Falcon XD won two Australian Touring Car Championships in 1981 and 1982 as well as the 1981 James Hardie 1000 at Bathurst with Johnson and John French driving.

Here’s Dick back with his famous car in this great video from Bowdens Own ….