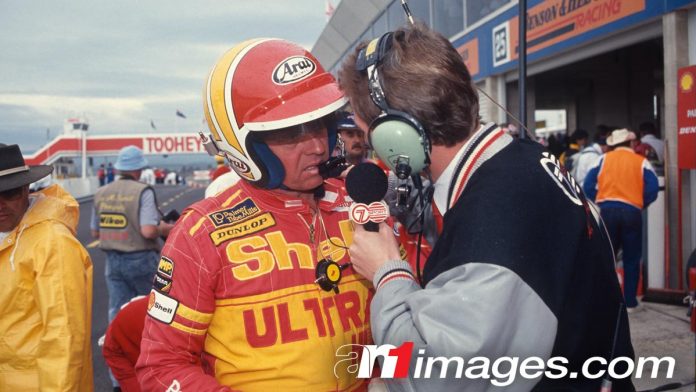 FORMER Dick Johnson Racing co-driver Jeff Allam has revealed a moment of self-sabotage that contributed to the #18 Ford Sierra’s narrow defeat in the 1990 Bathurst 1000.

The English touring car star co-drove the #18 Shell Ford alongside Paul Radisich to second place in the Tooheys 1000, 15 seconds adrift of the winning Allan Grice/Win Percy Holden Commodore at the finish.

In a race of high attrition, the #18 entry became DJR’s lead car when the #17 Dick Johnson/John Bowe entry retired with turbo trouble midway through.

Allam was the leader when he was called in for the car’s final stop on lap 130 where, in an era where cross-entering drivers was permitted, the team wanted to put Johnson into the car.

“Two-thirds into the race I was told over the radio, ‘Can you put the seat back as Dick is going to get in?” Allam recently recalled to Autosport Magazine’s Tom Howard.

“I was thinking Paul and me had done all the hard work, we were on course to finish on the podium, and at that moment we were winning.

“The cars in those days had sliding seats with a little adjustable notch that you pulled to move it backwards and forwards. I was thinking, ‘How can I not let Dick in the car?’

“I bent the bar down so the seat wouldn’t adjust, so when I came into the pits the seat was well forward for Paul and me and it wouldn’t move.

“In the end we lost about 30 seconds in the pits, which would have won us the race, but in the end Paul got back in.

“When I returned to the paddock after the race I pulled the lever back up and it worked perfectly.”

Allam’s lever trick was only one of two key factors in the car failing to win the race.

The team opted to switch from slicks to intermediates in that fateful stop; a decision that had to be rectified with another trip to pit lane under a subsequent Safety Car.

The extra stop conceded significant track position to the Holden Racing Team car, the Sierra going from being two lapped cars ahead to seven lapped cars behind in the Safety Car train.

Still, the leading Holden was low on fuel at the finish, and Johnson would almost certainly have been quicker than Radisich aboard the Sierra if he’d been able to get in.

“If you get on the podium at Bathurst you’ve done a good job,” added Allam.

“I was disappointed not to win it as we threw the chances away with the seat and the tyre call. We would have won it; we definitely had the fastest car.”

The Tom Walkinshaw Racing/Holden Racing Team Commodore VL that won Bathurst in 1990 was the very car Allam had been scheduled to co-drive with Walkinshaw himself in the Great Race two years earlier, when it retired a handful of laps into the race before the Englishman was able to drive.

Allam had been a TWR man for the bulk of the 1980s, which included tackling Bathurst in the squad’s Rovers (winning the Group A class in 1984), Jaguars and Holdens.

He returned for the 1989 and ’90 races with DJR before later making appearances as part of the B&H BMW and Allan Moffat Ford teams in ’93 and ’94 respectively.