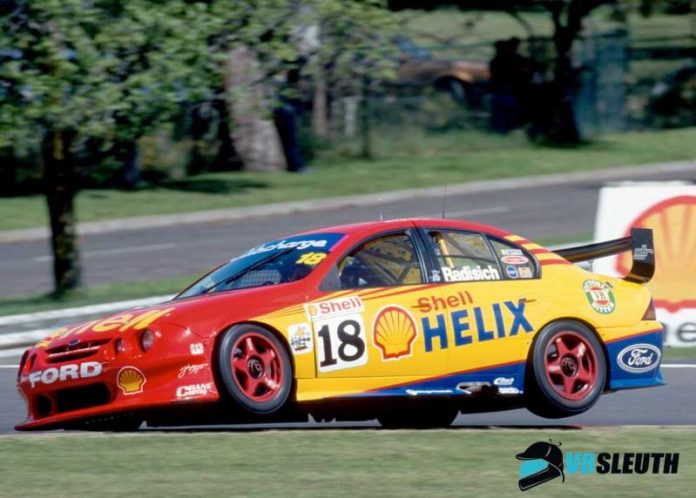 THE Ford Falcon AU V8 Supercar that ended a nearly 12 month streak of round victories by Holden has just been listed for sale in the V8 Sleuth Online Showroom here.

The Shell Helix Falcon AU – chassis DJR AU11 – is the third of five DJR AU Falcons built by the Queensland-based team and has great pedigree.

On debut it won the 2000 Sandown round of the Shell Championship Series in the hands of Paul Radisich, ending a streak of Holden Commodore victories that dated back to June 1999 and Jason Bright’s Hidden Valley round win for Stone Brothers Racing.

The car then finished second in the 2000 FAI 1000 at Bathurst in the hands of Radisich and Jason Bright, the latter making his first and only start for DJR.

The AU11 chassis continued to add victories in 2001 with Steven Johnson, the second-generation racer claiming his breakthrough round win on the streets of Canberra in that year’s GMC 400 event.

DJR continued to use the AU11 chassis into 2002, driven by Greg Ritter and Alan Jones that season, making the car the 1980 F1 World Champion’s last Bathurst 1000 car – he and Ritter finished seventh at Bathurst, above.

But the car’s winning career wasn’t over, and it raced on in what is now known as Super2, scoring more victories in Fujitsu colours with Owen Kelly at the helm in 2004.

The car comes with a massive number of spares from owner Dean Grant and would make a handy investment from a savvy collector looking to snap up a car from the early V8 Supercar era with race-winning history.

The full racing history of this chassis – and indeed all other DJR and DJR Team Penske touring car and V8 Supercars – is included in our soon-to-go-to-print book documenting the racing histories of 40 years of cars in team history.

Don’t miss out and pre-order the book here now, it will be a limited edition print run, each copy coming with a numbered certificate signed by Dick Johnson.